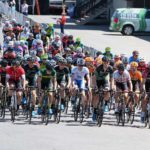 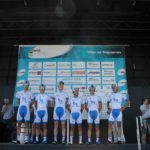 With temperatures maxing out around 36ºC /97ºF, the race splintered early into the 11-lap parcours. Team Novo Nordisk’s squad, which was a mix of veteran riders and neo-pros, was immediately put to the test with the short but steep climb situated inside the opening kilometer.

With each ascent of the climb, more riders fell off the back. With four laps remaining, an elite chase group emerged that included Team Novo Nordisk’s Javier Megias.

This group tried to bring back the 10 riders off the front but were never able to reel in any time. By the final lap, the peloton was shattered into nearly a dozen groups out on the 15.1-kilometer course. In the end, Steve Fisher (Canyon Bicycles) sprinted to the win from a five-man group. Megias finished as Team Novo Nordisk’s best-placed rider in 27th position.

“It was really hot today so everyone was dying by the finish. The focus was to survive and finish the race. The pace was high and the peloton was in pieces. We have a young team and came in expecting today to be a little easier. We will aim to make the break in the coming stages.”

Team Novo Nordisk, the world’s first all-diabetes pro cycling team, continues racing at the Grand Prix Cycliste de Saguenay on Friday with Stage 2. The 171-km race will see the peloton tackle nine laps around a 19-km course with 150 meters of climbing per lap. 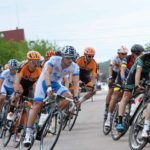 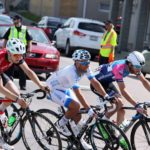 Compared to the GP Saguenay opener, which saw riders racing through nearly 100ºF weather, Friday’s 171-kilometer race was noticeable different with cloudy skies and powerful winds. Three riders escaped on the first of nine laps and built a maximum gap of 5:15.

With 70 kilometers remaining and the crosswinds wreaking havoc on the bunch, Team Novo Nordisk’s Javier Megias attacked off the front in an attempt to split the group. When no other teams joined him, he knew the move was short lived and returned to the peloton.

On the final laps, one rider bridged up to the break rounding it out to four riders. Yet their gap continued to plummet. On the final lap, which also featured the day’s only intermediate sprint, crosswinds caused a large crash in the peloton. Team Novo Nordisk’s Brian Kamstra and Reid McClure went down but both resumed riding immediately.

In the end, the escapees were caught in the kilometers, and Émile Jean (Silber Pro Cycling) won from a reduced bunch sprint. Thanks to a strong lead-out by teammate Stephen Clancy, Calabria was in solid position to take on the sprint.

“It was really windy today, so everyone was nervous and trying to be at the front, which makes for a stressful day. Everyone knew that the crosswind section would be decisive for the finish, so it was a big race heading into that section on the last lap. This is where all of the crashes happened.

In the end, Stephen did a good job keeping me out of the wind and dropping me off at the front in the second to last corner. From there, it was a drawn-out sprint through the crosswinds.” 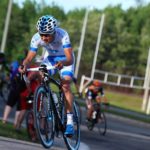 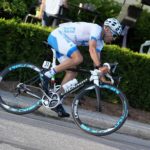 Kénogami, CANADA —Spanish rider Javier Megias earned his best result of the 2017 season when he finished fifth on stage 3 of the Grand Prix Cycliste de Saguenay.

Saturday’s penultimate stage featured a North American-style criterium, comprised of 35 laps through Kénogami on a fast 2-km course with steady corners and no major surprises.

The race kicked off with an easy start, but soon the attacks began and things became more risky. Megias and teammate Corentin Cherhal were active on the front, and when a group of 10 riders eventually managed to pull away, Megias was among them.

At first, the peloton kept the group in its sites, only affording a small gap of of 10-15 seconds, and for the first several laps it seemed like the leaders would be reeled in. But with each lap the break gained more time on the bunch, and by the final two laps it was clear that the break would stay away to the finish.

“I’m not a specialist when it comes to criteriums, but I was active from the start and managed to make the break, which stayed away. I did my best in the sprint, but unfortunately I lost to the stronger sprinters. Tomorrow is another day, and I’m ready to finish strong on the last and hardest stage.” 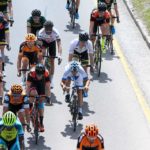 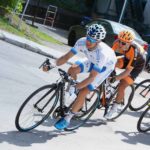 The 14-lap course featured a nearly seven-kilometer climb before a short flat section and a downhill run into the finish. From the start, the pace was high with numerous teams fighting to establish a breakaway.

By the third lap, the peloton split with Team Novo Nordisk’s Fabio Calabria making the first group. The race soon came back together, and a new nine-rider break successfully made it up the road and built a maximum gap of nearly 4 minutes.

With the overall race still on the line, Canyon Bikes set a nonstop unrelenting pace, which caused riders to fall off the back on each lap. By the final three laps, all that remained was a chase group of approximately 25 riders, including Team Novo Nordisk’s Javier Megias. In the end, the break stayed away until the finish. Steve Fisher (Canyon Bikes), who took the leader’s jersey on the opening stage, held on for the overall race win.

“It was a very, very, very windy final stage. The race started with a few strong breakaway attempts. Our riders were really aggressive early on and I think they paid for those earlier attempts later on in the stage. With the high pace and the punishing winds, it ended up being too much for a few of our guys. Javier was active throughout the day, but in the end, his group was unable to bring back the group.