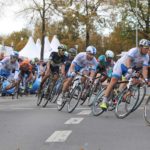 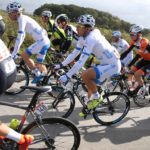 The quartet was held at a manageable gap throughout the stage and as the chasing peloton closed the gap to mere seconds, Carl Soballa (LKT Team Brandenburg) and Tony Martin (Team Katusha-Alpecin) attacked and stayed off the front until the race reached the three finishing laps around Münster.

With 12 km remaining, the escapees were reeled in with the sprinter’s teams fighting for position. The high pace splintered the peloton into dozens of groups around the 4.4-km circuit. Sam Bennett (Bora-Hansgrohe) took the win with Charles Planet finishing as Team Novo Nordisk’s best-placed rider in 44th position.
Stephen Clancy went down in a crash during Tuesday’s Sparkassen Münsterland Giro. The Irishman was immediately transported to a local hospital along with a team doctor.

“X-rays confirmed a displaced fracture to Stephen’s left clavicle and he will undergo surgery in the morning. With it being so late in the season, Stephen’s injury means he will not be able to race again this year and will now focus on his recovery in the off-season,” explained Team Novo Nordisk doctor Peter Lagrou.

“Today we expected a bunch sprint because it was mostly a flat race. There was a lot of wind, so it was really nervous all day and the crosswinds ended up causing some splits. My form felt good and I got myself into the front group. In the final circuits, the crosswinds forced a small gap between my group and the front group. Over all, I was happy with the day and motivated to carry this form into a block of Asian racing that kicks off next week.”