Meeting young people with diabetes and showing them they can chase their dreams is what Team Novo Nordisk is all about. Meet the inspiration people who came out to cheer on their team at Brabantse Pijl! 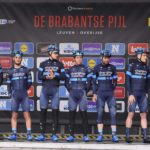 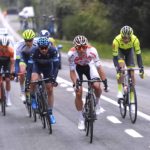 Overijse, Belgium — Andrea Peron put up a standout performance at the 2019 edition of the Flanders Classic Brabantse Pijl showing once again the fighting spirit of Team Novo Nordisk, this time on Belgium soil.

The 30-year-old Italian, who a few weeks earlier made headlines as one of the four Team Novo Nordisk riders in the Milano-Sanremo breakaway, raced aggressively and was part of the seven-rider breakaway that formed soon after the official start in the outskirts of Leuven.

Peron rode strongly and benefited from a good cooperation from his fellow escapees which allowed the gap to swell to north of five minutes.

However, as the race approached the final circuit around Overijse, the breakaway’s advantage had dwindled down to just over a minute and quickly dipped downwards after the first passage on the finish line.

Peron was eventually absorbed by the peloton as he entered the second of the three finishing laps after a solid day’s work at the front of the sixth and last of the Flanders Classics of the calendar.

The last 60km were lit by successive attacks from the bunch, the first of which had Mikkel Frolich Honoré (Deuceunick – Quickstep) and Tosh Van Der Sande (Lotto Soudal) as protagonists. Mathieu Van der Poel (Corendon Circus) also went on the offensive and launched multiple stinging attacks that exploded the peloton. The remnants of the breakaway were caught with 33km to go and the favorites started to play their cards for the overall win. In the end the day’s victor was Van der Poel who edged out Julian Alaphilippe (Deuceunick – Quickstep) on a four man sprint.

In the bunch Charles Planet was aptly protected by his Team Novo Nordisk teammates all day and the Frenchman delivered a powerful performance which enabled him to cross the finishing line in the front group in a solid 32nd position.

Team Novo Nordisk returns to racing next week in Tour of Croatia, (April 23-28).

“I did a lot of sacrifices and hard work at home coming into this race. It was my last test ahead of some important stage races the team has coming up. I really surprised myself today.I had really good legs and was overtaking riders all the time on the climbs. I just need to believe more in myself. The pace was really strong today and I’m really happy with my performance. I gave everything. With 500m to the finish my legs exploded and maybe 10-15 guys passed me. I thought a top 20 was in sight but in the last minute of the race I was done. This result gave me a lot of confidence for the next months.”

“Today the team’s first goal was to put someone in the breakaway. It was a hard day because of the headwind and constant up and down. We tried to stay in front for as long as possible but in the end everyone was on the limit. In this race I know that for me it would be impossible to fight for a top 10 result so it’s an opportunity to do the job for the team being in front of the race in the breakaway.”