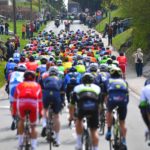 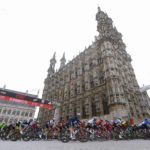 A six-man break escaped early into the 197-kilometer race and earned a maximum gap of 6:45. As the race reached the hills, Christophe Prémont (Vérandas Willems-Crelan) fell out of the break and with 90 km remaining, Zak Dempster (Israel Cycling Academy) experienced a mechanical and dropped out of the break. The remaining quartet was swept up as they reached the final three 23-km laps around Overijse, Attacks followed, which formed a new front group. The reduced peloton attempted to reel them in, but this group held on by less than a minute until the finish with Sonny Colbrelli (Bahrain-Merida) sprinting to the win.

“It was a hard day today. I’ve done this race three times, and this was by far the fastest to date. Unfortunately, I hit the ground, but I made it back and finished the race. I feel that my form is growing and I’m getting the legs for the Tour of California.”

“Today, we finished three riders just outside of the front bunch. They were all together with one lap to go and positioning served as our key mistake of the day. They fell off the front with 10 kilometers to go. It is a hard race with a big champion (Philippe Gilbert) here, but we can see that the form is getting better every day.”