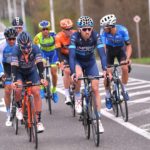 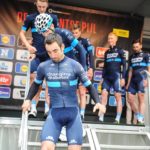 Overijse, Belgium — Team Novo Nordisk’s Andrea Peron starred in the main breakaway on Wednesday at the 58th edition of Brabantse Pijl. The 201.9-kilometer Belgian Classic kicked off on the Grote Markt in Leuven and featured 27 climbs before finishing in Overijse.

After the first 10km of racing, seven riders, including Peron, escaped to form the day’s break and earned a maximum gap of 7:50 before splintering on the laps around Overijse.

By the final lap, two riders remained out front, but were caught inside the final 10km, and counterattacks ensued. In the end, Tim Wellens (Lotto-Soudal) soloed to the win, with Charles Planet finishing best for Team Novo Nordisk, 9:18 behind Wellens and the leaders.

“The race started fairly slowly but once we reached the laps around Overijse, the World Tour teams pushed the pace and it caused the peloton to fracture. By the final laps, my legs were feeling pretty done after all the climbs.”

Team Novo Nordisk, the world’s first all-diabetes pro cycling team, continues racing at its fourth consecutive Tour of Croatia, when the six-day race kicks off on Tuesday, April 17 in Osijek.

“It was our main objective to get in the breakaway today and fortunately I attacked at the right moment to start the move and that makes it the third time I was in the break at Brabantse Pijl, so that’s pretty satisfying.”

“I’ve been here before, so I know it’s a hard race, but the pace was super high today. We worked well together as a group, but we knew the peloton wasn’t going to let us go all the way with the big manes in there vying for victory.

“Thankfully the rain held off and the cobbles were dry, it’s always a pleasure to race in Belgium and I loved every minute of it today.”

“Andrea felt good this morning and we knew from past experience here that we needed to be switched on right at the start if we were going to get in the right breakaway move. That’s why we placed three or four guys right up there in neutral to attack early and increase our chances of getting up the road.”

“The plan worked well and Andrea’s attack sparked the move. They stayed away for close to 150 kilometers, so I am happy with how Andrea went today. Cobbled classics are always tough wars of attrition with relentless short and steep climbs that really take it out of you, so in that respect today was very good preparation for Paris-Tours coming up on Sunday.”

Team Novo Nordisk heads to France for its last race of the 2020 season on Sunday 11th October at the historic one-day classic, Paris-Tours.