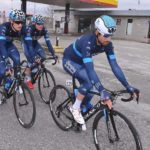 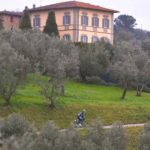 LARCIANO, ITALY — Team Novo Nordisk took the start at the 41st edition of the punchy, Tuscan circuit race GP Industria & Artigianato on Sunday, with an eye towards the team’s March 17 appearance at the spring classic, Milan-San Remo.

The race was comprised of seven laps with with climbs in San Baronto and Fornello, and a group of eight riders managed to pull away to form the day’s main breakaway, establishing a gap of over 3:00. The Team Novo Nordisk squad remained with the peloton.

On the the race’s final climb, the peloton caught the break, and soon after, a group of 15 riders broke off and built a small gap. From there on, rider after rider went on the attack, but it was Matej Mohoric (Bahrain Merida Pro Cycling Team) who went on to take the win. David Lozano finished best for the Team Novo Nordisk squad, 1:18 behind Mohoric.

“We just finished the race – we started in a flat circuit, and we ended up on a much hillier circuit with some hard and steep climbs. The pace really started to get high after two laps. I was in the first group until 2 kilometers to the last time in. Everyone was on the limit and suffering a lot, so we all looked at each other to make it again. I think it was pretty good preparation for San Remo, which is coming up in just over ten days.”