Ride with Charles Planet as he gives all at the Tour of Estonia prologue to finish at a solid 4th. 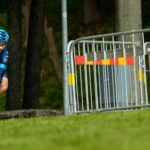 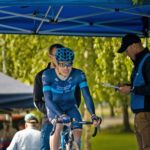 Tallinn, Estonia – Team Novo Nordisk got off to a strong start at the 2019 edition of Tour of Estonia with Charles Planet securing the 4th place in the 3.7 km opening prologue in the capital Tallinn.

Hot off the heels of an impressive performance last week in Tour of California Planet made the most of his good form and powered across the finishing line in three minutes and 37 seconds, less than a second shy of the podium.

The short but very technical parcours suited the 25-year-old Frenchman who, for a long time, held the best provisional time. Eventually Planet was dethroned in the hot seat by three other riders, including Matthias Brändle (Israel Cycling Academy) who confirmed his status as prologue favourite and won emphatically with almost 10 seconds advantage to the second placed rider.

Team Novo Nordisk continues to fight for glory on Estonian soil this Thursday on Stage 1 that will link the capital Tallinn and Tartu over 187km. Charles Planet will start in the 4th position in the overall classification.

“I’m really happy to take 4th place in the Prologue after such a really short time to recover from (Tour of) California plus the 10-hour time difference. It was a really nice course with a straight first part with a lot of headwind and then a short uphill which I rode fully out of the saddle and a pretty technical final. I gave my maximum and got 4th place. The riders who finished in front of me were just stronger today. I’m happy and already looking forward to the next stage to give more and maybe to get a win.” 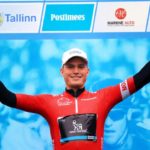 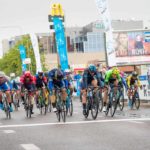 Tartu, Estonia — Team Novo Nordisk put up a memorable performance this Friday at Tour of Estonia with two podium placings on the same day, a new milestone for the world’s first all-diabetes pro cycling team.. Andrea Peron sprinted to an impressive third place in Tartu while Sam Brand raised his arms by stepping into the leadership of  the King of The Mountains classification.

Cold temperatures and constant downpour set the tone for a hard stage 1 that led the peloton from the capital Tallinn to Tartu over a mostly flat but rain-drenched parcours that included two intermediate sprints and two KOM’s.

Team Novo Nordisk wanted to race aggressively and was committed to have at least one rider at the front of the race and after successive attempts it was Isle of Man’s Sam Brand who managed to forge ahead with four other riders. The quintet rode strongly and after 30 km their advantage over the peloton had stretched to two and a half minutes.

Sam Brand, who last week clocked over 1300 km in the saddle during the Amgen Tour of California, made the most of his good form to get in the mix for the two jerseys up for grabs. The 28-year-old was second on the first KOM of the day and outsmarted his breakaway companions launching a fierce attack and going solo for eight kilometers to score maximum points on the second categorized climb and secure the lead in the King of the Mountains Classification, his first jersey as a professional cyclist.

With his mission accomplished Brand negotiated the descend safely and was was eventually swept up by the charging peloton with a little over 12 km to go. Soon after a flurry of attacks ensued from the bunch but Team Novo Nordisk was attentive and covered all the critical moves, particularly Charles Planet who rode strongly at the front.

Following the cue from his teammates Brian Kamstra played his card just inside the last 10 km and attacked off the front. Our Dutchman put his head down and opened a decent gap between himself and the bunch, riding solo solo for nearly six kilometers before being caught inside the city limits.

In the end the stage was decided on the final stretch with Andrea Peron sprinting to an impressive third place in the wet roads of Tartu. Less than a week after scoring his and the team’s first Top10 placing in a World Tour race, our 30-year-old Italian secured the first for Team Novo Nordisk stage podium this season. With this result Peron climbed from 11th to 7th in the General Classification Standing.

To conclude a day of stellar teamwork Frenchman Charles Planet crossed the finishing line in 10th and sits now in the 5th position in the GC, just 10 seconds off the race leader Matthias Brändle (Israel Cycling Academy).

Tour of Estonia ends this Saturday with the 172.8km stage 2 in Tartu where another bunch sprint finale is expected. Team Novo Nordisk will start the day with Sam Brand in the red jersey, symbol of the King of the Mountains classification leader.

“Today was a great day! We executed our game plan for the stage to perfection. Sam made the break and took the (King of the) Mountains jersey. The rest of us rode together in the peloton without any stress and in the end I tried to get the best possible result. I was feeling good but was boxed in a bit until 150m to go but when I found the space I was able to pass several riders and take the podium”

“Following my DS’s orientation I tried to save my energy in the breakaway and not go full gas with the KOM fight in my head. I went for the sprint in the first KOM and came second. I felt good and thought why not go again. The peloton was catching up to us and about eight kilometers to the final KOM I said I have to go now as we only had about 20 seconds advantage at that point. They chased me for two or three minutes but I put my head down and continued solo. After the climb I was so happy because I knew I had taken the red KOM jersey. It’s my first jersey as a professional cyclist so I’m over the moon!” 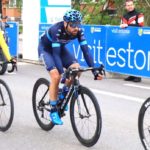 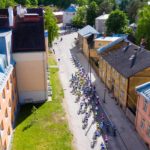 Tartu, Estonia — Team Novo Nordisk fought fearlessly and concluded the 2019 Tour of Estonia with a fourth place from Andrea Peron on the second and final stage that took place in Tartu. The world’s first all-diabetes team placed two riders in the Top-10 in General Classification with Charles Planet and Andrea Peron finishing in 7th and 8th, respectively.

Stage 2 in Tartu consisted of a 9.7km lap that had to be taken a total of 18 times. The urban circuit setting favored an aggressive style of racing and it was no surprise that several attacks went from the gun. Team Novo Nordisk set out with high goals, the first of which was to defend Sam Brand’s King of the Mountain Jersey. The 28-year-old Isle of Man rider started the day in red and with two KOM’s up for grabs during the stage it was critical to keep the opposition in check and cover any significant moves.

Charles Planet did very well to take maximum points in the first KOM but Isac Lundgren managed to take second on the categorized climb scoring two points, enough to level his tally to five, the same as Brand. In the end, his higher position on the General Classification was decisive and Brand had to settle for the second position in the Mountains Classification.

Five riders went on a breakaway and animated the stage up until the last four laps when they were eventually reeled in by the Israel Cycling Academy led peloton. Soon after the upping of the pace led to splits in the bunch. Team Novo Nordisk rode strongly at the front and had the numbers with no less than four riders in the lead group with three laps to go.

In the final two laps, the Estonian National Champion Mihkel Räim seized his opportunity and broke clear with four other riders, amongst them our Finn Joonas Henttala. As the quintet crossed the finishing line, taking on the final 19km, they had opened a gap of half a minute to the chasing group with Planet, Andrea Peron and Peter Kusztor in its flanks.

Having spent much of the day working in the peloton Henttala didn’t have enough in the tank to follow the wheel of his breakaway companions and fell back to the peloton focusing what energy he had left to help his teammates.

Ultimately, it was Räim who held off the pursuers and took a comfortable win, securing not only the stage victory but the overall classification. Andrea Peron sprinted to second place in the bunch which gave him a fourth position in the stage.

With two final Top10 placings, one podium result on Stage 1, two fourth places on the Prologue and final stage and a day in the King of the Mountains jersey, Team Novo Nordisk showed their character and strength in depth in a very attritional Tour of Estonia, racing competitively and showing the #ChangingDiabetes jersey at the forefront of all the stages.

“We had the King of the Mountains jersey and two riders on the Top 10 of the GC. The plan was to to defend the jersey, climb a few spots on the GC and fight for the stage win. In the end two guys managed to stay away and I took second on the bunch sprint. It was a Top5 on the stage and it was a good day but not perfect. We raced well, we raced aggressively and were always with a lot of guys in the front but we wanted more from this race.”