I’m one of the more experienced riders in the team, and want to share my experience on racing and diabetes management with my young and talented teammates.

Finnish star Joonas Henttala returns with Team Novo Nordisk in 2023 with the former national champion now one of the elder statesmen of the team and ready to use his experience where it counts. Out there on the road.

In 2021 years of frustration and podium places at the Finnish National Championships finally melted away for Henttala as the versatile all-rounder capped his season with a fine victory in the nationals road race, achieving TNN’s first national champions jersey and realizing a lifelong dream.

Now in his 11th professional season, the all-rounder grew up in an athletic family in a small village in Finland. Henttala earned his first professional podium in 2014 when he sprinted to second place from a two-man break at the Finnish National Road Race Championship. In 2016, Henttala took seventh on Stage 1 of Brazil’s Volta Ciclística Internacional do Rio Grande do Sul. Additional career highlights include ninth on Stage 2 of the Tour de Filipinas (2015) and finishing just off the podium in fourth place at the 2017 Finnish National Road Race Championship.

A busy 2019 racing program was highlighted with a sixth-place finish on Stage 6 of the Tour du Rwanda, strong performances in California and Estonia, and a top 10 finish at the Finnish National Road Race Championship before a disrupted 2020 season due to Covid-19. Nevertheless Henttala still managed to complete 4,000km of racing and third place at the nationals.

At the age of 10, Henttala had just begun racing when he started exhibiting typical diabetes symptoms. His father, who also has type 1 diabetes, immediately noticed the signs. Thanks to Henttala’s familiarity with diabetes and his father’s athletic lifestyle, he resumed playing sports immediately following his diagnosis.

In his youth, Henttala hid his diabetes from his teammates because he feared monitoring it during a ride would slow everyone down. Now that he rides with a team composed exclusively of riders with type 1 diabetes, he finds it reassuring to be with a group that can relate to the condition. Thanks to the camaraderie, Henttala says his diabetes management has improved.

For Henttala, riding in races he watched on TV during his childhood is a dream realized. The 31-year-old always imagined being a pro athlete, but never thought he would be where he is today because of diabetes. When he isn’t training, Henttala likes hanging out with his wife and young son, spending time with friends and playing the guitar. 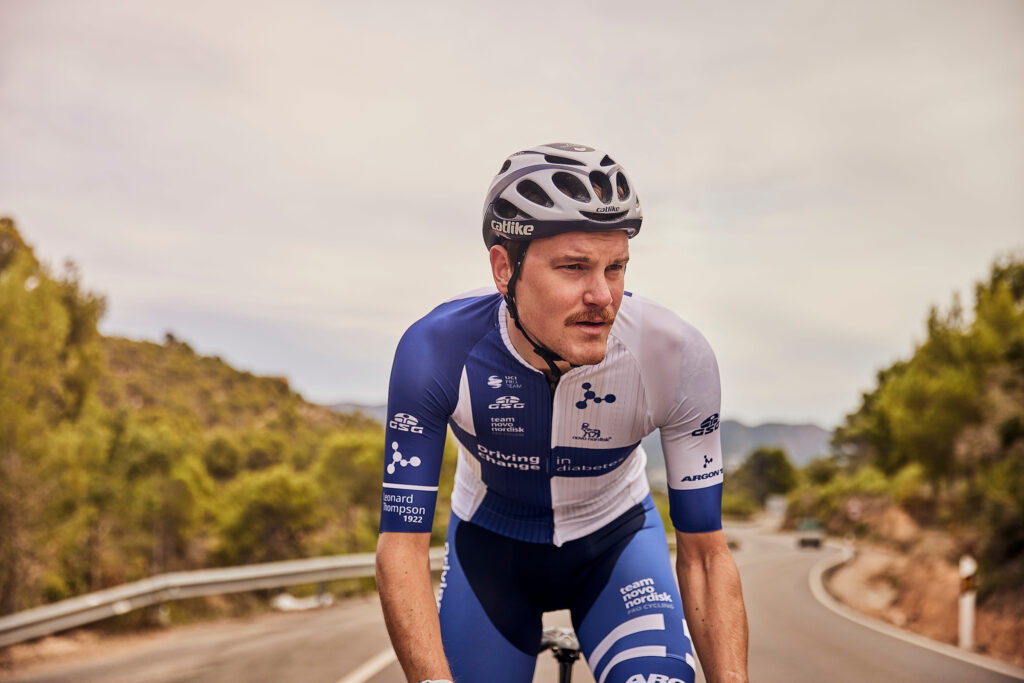 I was diagnosed when I was 9 years old. I had many of the standard symptoms of high blood glucose: I was thirsty, I had to go to the toilet a lot and I felt lethargic.

What was your initial reaction?

First I was upset. I knew it was a chronic condition and that it would be part of me for the rest of my life.

They reacted the same way I did. We were a bit disappointed at first, but once it became my routine and they saw I could manage it well, everyone just accepted it as part of me.

No, not for a second. I was determined to get back on the bike, and my doctor supported me as well. He told me exercise can actually be good for people with diabetes.

What was it like riding with diabetes and how did you adjust?

I always keep an eye on my blood glucose, even more so during a ride, and I make small adjustments until I find a balance.

I loved riding from the first time I got on a bike. The sense of freedom was incredible as a kid. There was a really strong cycling culture in my hometown of Porvoo, too, so that helped a lot.

I started competing when I was 9 years old.

When you first started competing, did you tell anyone (teammates/coaches/trainers) about your diabetes?

I was diagnosed less than a year after I started competing. I worked with my health care team, and my dad coached me and helped me to feel like it’s not a big deal. I can still ride.

How/when did you know cycling was something you wanted to do professionally?

When I was about 15-16 years old, I began to get really good and earned some international wins. I thought maybe it could become my job as well. After, it was my dream to become a pro.

Maybe it’s not the biggest event, but I had the best feeling when I won the first Finnish cup race in the Elite Men’s category when I was 18 years old. It was my second race in that category.

I was invited to race with the Development team, and after a couple of weeks, I was asked to join the Pro team.

My passion is my job, so I live for it 100%. Cycling is my passion and having diabetes doesn’t change or affect that.

I like technology: computers, games etc. I follow other sports, hang out with friends and play guitar every now and then.

← Jan Dunnewind
Declan Irvine →
back to pro team
We use cookies on our website to give you the most relevant experience by remembering your preferences and repeat visits. By clicking “Accept”, you consent to the use of ALL the cookies.
Cookie settingsACCEPT
Manage consent