Fast racing began straight from the start as a break of 14 riders pulled away early. Team Novo Nordisk was eager to get into break but were thwarted by the tough race profile. The leaders gained a maximum advantage of four minutes before being reabsorbed by the peloton with 90km to go. The bunch was fractured as it encountered the race’s first categorized climb and a new lead group with several chaser was formed.

Approaching the race’s final 10km, the lead group split once again, and Movistar’s Ion Izagirre and Team Sky’s Sergio Henao (Team Sky) pulled out in front to battle it out in the final kilometers. In the end, Izagirre out-sprinted Henao to take the win. Team Novo Nordisk’s Javier Megias, who is still recovering from a cracked wrist, remained with the main group until the last climb and finished best for the squad at 22nd.

“The race course was hard,” Megias said, “and the race was really fast all day, never letting up. I had lot of pain in my wrist, but I tried to my best and deliver a good performance in my home country. I’m looking forward to being fully healed to and keep improving at the upcoming races.” 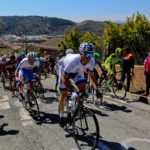