Hoogeveen, the Netherlands – On Saturday, Team Novo Nordisk tackled its only Dutch race of the year at the 54th edition of the Energiewacht Ronde Van Drenthe. The 197.1-kilometer race featured a challenging profile that featured over half a dozen pave sections and five times up the VAM-berg. The race began and ended in Hoogeveen and saw an early five-man breakaway reduce down to two riders by the final time up the VAM-berg. As the race hit the finishing circuits around Hoogeveen, it had splintered into several groups with one rider out solo followed by a 19-man chase group. The race came down to this front group with Jesper Asselman (Roompot-Oranje Peloton) sprinting to the win from the reduced peloton.

“This was my first time racing at the Ronde van Drenthe and I have heard so much about this race and the paves,” Charles Planet said. “It was a tough race, narrow roads, freezing cold and very fast on the final circuits. I tried to work for my teammates as much as possible and learn what I could from this type of racing.” 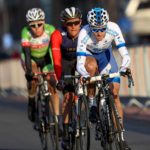 tnn / March 12, 2016
all news
We use cookies on our website to give you the most relevant experience by remembering your preferences and repeat visits. By clicking “Accept”, you consent to the use of ALL the cookies.
Cookie settingsACCEPT
Manage consent