Osijek, Croatia —Team Novo Nordisk’s Andrea Peron set the stage for the six-day Tour of Croatia when he took 15th place against some of the best sprinters in the world on Tuesday’s opener.

Stage 1 was a 230.4-kilometer run from Osijek to Varazdin. The race began under threatening skies and the peloton experienced some rain throughout the lengthy day. A four-man breakaway escaped early and gained a maximum gap of more than 10 minutes. With 40 km remaining, Guillaume Boivin (Cycling Academy Team) attacked the break and set off solo. The Canadian stayed out front until the finishing lap around Varazdin when he was caught by the peloton. Giacomo Nizzolo (Trek-Segafredo) took the win on the narrow and technical finish.

“The Tour of Croatia is my first stage race back since my crash at Dubai Tour,” Team Novo Nordisk’s Nicolas Lefrançois said. “I would say today went okay. It wasn’t amazing, but it also wasn’t bad. For me, the real focus is getting some race speed in my legs and feeling comfortable again.” 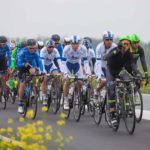