Split, Croatia —Team Novo Nordisk’s Kevin de Mesmaeker (BEL) ensured a good showing for the Changing Diabetes® jersey on stage 2 of the Tour of Croatia, featuring in the day’s six-man breakaway. The escapees pulled away soon after the start in picturesque Plitvička Jezera and gained a gap of more than 4:30 before being reeled in with less than 40km to go before the finish in Split.

“I really went for the Mountains jersey today,” said de Mesmaeker, who took first and second on the race’s two categorized climbs and finished second overall on the day behind Nicola Boem (Bardiani – CSF). “I ended with the same points as the leader, but since he took the second climb, he won the jersey.”

As the race approached its final kilometers, a crash split the peloton, and only Team Novo Nordisk’s Charles Planet (FRA) was able to remain with the lead group and represent the squad. Planet went on to finish 31st behind stage winner Mark Cavendish (Dimension Data). 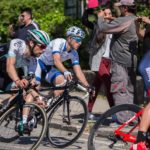