Saturday’s 144-kilometer circuit featured 15 laps around a technical 9.6-km course. Charles Planet featured in a four-man breakaway that stayed away until the final two laps around Tartu. Team Novo Nordisk raced well together in the final laps to set up Verschoor for the finish. Roman Maikin (Gazprom-Rusvelo) sprinted to the win while Verschoor was blocked in on the right side and was only able to sprint to eighth. Grzegorz Stepniak (CCC Sprandi Polkowice) won the overall, while Planet finished as Team Novo Nordisk’s best-placed rider in 12th, 12 seconds behind Stepniak.

“Three top 10s in a little over a week; it’s not too bad,” Verschoor said. “I can feel that I’ve really come into my form. Today, I got stuck on the right side and couldn’t open up my sprint. I’m heading into another block of racing in North America next week and I hope to finally get on the podium.” 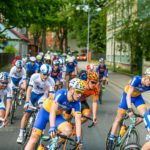