Breakaway Stays Away On Stage 4 of Tour of California

Santa Clarita, CALIFORNIA — Stage 4 of the Tour of California featured a lump profile complete with four categorized climbs before an uphill run into Santa Clarita.

Team Novo Nordisk lined up at the front of the peloton from the start and battled to make the day’s main breakaway but luck wasn’t on their side, and when a six-man break escaped, no Team Novo Nordisk riders were present.

Thanks to a strong tailwind for most of the 159.5-kilometer stage, the breakaway earned an impressive gap of nine minutes. The escapees worked well together while the sprinter’s teams delayed taking control and chasing them down. This meant the break just barely stayed clear until the finish. Evan Huffman (Rally Cycling) took the win ahead of his teammate Rob Britton while Peter Sagan (Bora-Hansgrohe) led in a reduced peloton 13 seconds later.

“It was an interesting day with lots of climbing and some technical, high-speed descents. None of the teams wanted to help Bora-Hansgrohe reel back the break, so the gap failed to come down. Once the race was on the final descent, the peloton finally increased its speed and this caused many fractures in the group. Charles (Planet), Javier (Megias) and Joonas (Henttala) were all up there, but the speed proved too much for some of our riders. I was impressed with how Charles rode today; he is definitely developing as a rider.

“It was really fast all day. Javi and I both tried to make the break, but we missed it. Then it was a full-gas because the break was allowed nine minutes. With 50 kilometers to go and due to the pace and wind, the peloton split. I did my best to stay at the front and I tried my chance in the finish. I’m not a pure sprinter, so it was hard for me. I feel like I did my job as well as I could. Tomorrow is the Queen Stage and it is designed for a true climber, so I don’t think it’ll be the day for me. I’m looking ahead and aiming to make the break again before the end of the week.”

The world’s first all-diabetes pro cycling team continues racing at the Tour of California on Thursday with Stage 5. The 78.0-mile (127.0 kilometers) stage begins at the Ontario Convention Center and includes two categorized climbs before a summit finish up Mt. Baldy. 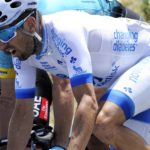