ABU DHABI, UAE — Team Novo Nordisk put Joonas Henttala man in a breakaway on Sunday – the ninth time in ten February stages – and then launched David Lozano up the final mountain on the final day of the Abu Dhabi Tour.

Lozano arrived with energy to spare at the base of Jebel Hafeet, an 11km serpentine road that snakes up the long mountain ridge just outside Abu Dhabi’s garden city of Al Ain. His teammates all helped to surround and protect the Spanish rider from strong winds throughout the day, while jostling for position in the 124-rider main peloton, and Joonas Henttala helped from a distance of nearly 10 minutes in front in the breakaway.

Rain in the early morning kept temperatures cool, and by start time the winds had increased to considerable strength. Henttala found himself in a powerhouse breakaway of nine riders, with strong motivation to reach the mountain first, and then rode efficiently up to and across the base of the climb.

Lozano kept pace with the leaders through the tough, early section of the mountain, and then found a steady rhythm to finish atop Jebel Hafeet in the company of his climbing companions.

Charles Planet did not start the last stage, with symptoms of a cold, but is expected to recover quickly.

“Maybe today’s breakaway was the most important of the last nine. Joonas in the front meant that we could spend our energy fighting for position in the peloton instead of having to chase. Sam, Andrea, Rik and Romain all helped me to keep my energy and got me to the mountain in good shape. It was nervous because of the wind, definitely not relaxing, but great work against the best riders in the world.” 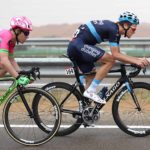