Fujairah, UAE —For the third consecutive day, Team Novo Nordisk put a rider in the day’s main breakaway a the Dubai Tour. For Stage 3, it was neo-pro Quentin Valognes’s turn to ride off the front.

When Loic Vliegen (BMC Racing Team) attacked at the start of the 180-kilometer race, Valognes saw an opportunity and quickly grabbed his wheel. They were soon joined by two additional riders and earned a maximum gap of 6:40”. Valognes was second through both intermediate sprints.

As the race reached the feed zone, the winds shifted causing the peloton to splinter. Quick-Step Floors took advantage of the situation and increased the pace, which soon reeled in the breakaway.

While fighting through the crosswinds, Brian Kamstra and the rider ahead of him crossed wheels, which caused the Dutchman to crash. He sustained no injuries, just road rash. He quickly changed bikes and fought back to the peloton.

As the race climbed up through the Hajar Mountains, Tom Bohli (BMC Racing Team) animated the race by making a late race attack but the sprinter’s teams quickly stopped him.

“It wasn’t the plan for me to get into the breakaway today but when I saw Vliegen go, I knew I had to jump on his wheel but I expected for the peloton to chase us down. It was my first time that I’ve been off the front in a breakaway since moving up to the pro team. It was good to be in the break again after Charles’ two days; I like everyone knowing that we are here. Cycling is a game and we always have to be ready to play.”

“Quentin was in the break from the beginning of the stage. It was good experience for him. He typically is Andrea’s last guy in the end for the sprint, and he did a great job in the break going for intermediate points.

Otherwise, it was a chaotic stage and the main group was split up into pieces around the field zone. There were crosswinds and then the split. Brian went down but he’s okay and made it back to the main group. In the end, the race came all back together. In the finish, Andrea and the team did an amazing job in the sprint.”

Team Novo Nordisk, the world’s first all-diabetes pro cycling team, continues racing at the Dubai Tour on Friday with Stage 4. The 172-kilometer stage is the race’s Queen stage. It begins at Skydive Dubai and features two intermediate sprints before a step finish up Hatta Dam with gradients topping out at 17 percent. 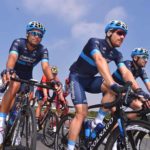 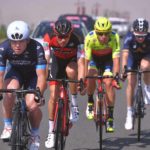