Three Team Novo Nordisk riders – Valognes, Chris Williams and Charles Planet – entered Stage 5 still in contention for the jersey. From the start of Saturday’s 132-kilometer race, Team Novo Nordisk went on the attack and individually nearly the entire squad was off the front of the peloton trying to make the breakaway.

As Williams and Peron attempted to escape, they went through a disorganized left-hand turn that caused Williams to crash. Unfortunately, he was unable to resume racing.

The crash reshuffled the race and Valognes made it off the front with three other riders and quickly earned a gap. The 21-year-old neo-pro needed seven points to win the intermediate sprint jersey.

Through the first intermediate sprint, he was second, which meant he must win the final sprint. He timed his sprint perfectly and easily won the sprint. Soon the breakaway splintered and Valognes was swept up by the chasing peloton.

A crash in the final corner of the race created chaos within the sprinting peloton, but Peron maintained his line and was able to sprint for ninth place. Elia Viviani (Quick-Step Floors) won the stage and the overall Dubai Tour.

“The team spirit since Stage 1 has been unbelievable. We’ve been in every single breakaway and aggressive on every single stage. Our mission is to inspire, educate and empower people affected by diabetes. It wasn’t just my performance; it was the performance of the whole team that shows we are changing diabetes.”

“I’m so proud of what the team did today because it was every single rider on the team attacking and fighting and finally Quentin got in the breakaway. He took some sprints, earned the jersey and helped us change diabetes for the world. A very proud day for Team Novo Nordisk, a great week for us in Dubai and an amazing way to show the world what is possible with diabetes.”

“X-rays confirmed a fracture to his right angle. We are waiting for a follow-up evaluation to determine if it will require surgery. Additionally, he required stitches on his upper right leg. The plan is for him to be transferred home tomorrow and then we will re-evaluate him,” explained Team Novo Nordisk Doctor Peter Lagrou. 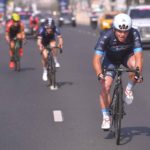 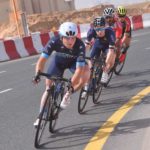 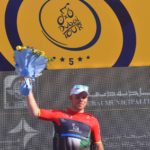