Poli Shines in Rainy Breakaway at Tour of Croatia

KOPRIVNICA, CROATIA — Umberto Poli spent four hours in a wet and windy breakaway on Tuesday in order to compete for bonus seconds in three intermediate sprints during the first stage at the Tour of Croatia.

Poli and three other riders escaped in the opening kilometers of the stage in warm temperatures and a light wind. The small group worked constantly to build an advantage of more than five minutes, but within the first hour a light rain began to fall as the wind speeds picked up.

Poli finished the three sprints with a four second bonus, and after 150k went back to the peloton to help teammate Andrea Peron in the mass finish. Rain intensified in the final kilometers of the race, but soon after gave way to sunshine.

“I was in the breakaway for four hours, 150km. We were just four riders, so it was a long, hard day. At Milano-Sanremo last year we were 10 riders, so we had more time for recovery. Today we were just four riders, so we didn’t have any time to recover. We needed to work a lot and spend more energy. We started in sunshine, but after 60k it began to rain and kept raining until the finish. After the race the sun came out.” 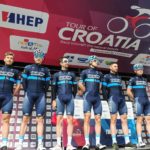