ZADAR, CROATIA – Charles Planet attacked the whole peloton on Wednesday, launching a late counterattack in the final kilometers of stage two at the Tour of Croatia.

Planet saw his opportunity to disrupt the sprint trains on the road to the finish in Zadar on a day that started under sunny skies in the middle of the country but then turned so windy that race organizers temporarily stopped the competition to protect the peloton from danger.

At the top of the day’s lone climb, after 170km, officials and teams cooperated to neutralize a 20km descent and a further 15km of flat roads towards the Adriatic coast. Powerful crosswinds pushed fragile cyclists off their bikes and caused several crashes as the peloton rode slowly and carefully until turning southwest to find the wind at their backs.

In the final 14km of the stage Planet took advantage of a tactical pause as sprint teams sized each other up before the finish in Zadar. The French rider was joined by another rider from the peloton and together the two escapees held off the bunch for 5km and the entrance to the final circuit.

“Today we had a lot of crosswind during the stage, and the organizers decided to neutralize the race for about 35km, because it was really dangerous on the road. I saw a lot of guys crash, and the race officials definitely made the right decision.

“At the beginning of the season I was in a lot of breakaways, and today I wanted to show myself as an attacker. If you never try, you never get anything. I had to wait a little bit for the other guy, but then we had good collaboration and I had good power in the legs. We got caught in the end, but it was nice for the confidence for the next stage.” 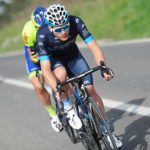 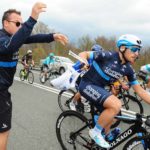