Planet & Lozano Finish Top 10 in GC at Tour of Estonia

TARTU, ESTONIA — Charles Planet finished fifth on Saturday in the final stage of the Tour of Estonia, with strong help from his teammate David Lozano in a late-race breakaway that shattered the peloton on a sunny day in Tartu.

With three laps to go Planet attacked on the first of two hills in the 9.8km circuit, and split the pack of around 100 riders down to less than 15. Lozano joined the French rider in the breakaway and led from the front to keep the pace high and control late attacks.

Early work by Andrea Peron helped Team Novo Nordisk in the opening laps, but constant attacks by rival teams changed the composition of the breakaways nearly every circuit. Close attention at the front of the pack by Umberto Poli and Fabio Calabria helped to limit the time advantage of the escapees, who were determined to win in front of thousands of fans lining the roads of the University town.

“The race was really fast, and we had Andrea in the first breakaway. When they came back my director told me on the radio to go on the attack, so I just went all out on the climb and David followed me. We were 13 guys in the last breakaway, and some teams had three guys, so it was good to have David and me together. At two laps to go I knew we were going to the finish. Thanks to David I had the best possible position for the sprint.” 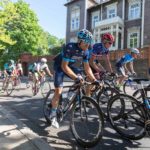 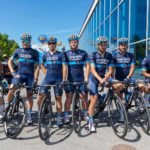