South Lake Tahoe, California —  Team Novo Nordisk stood front and center at the startline of Stage 2 of the Amgen Tour of California with Frenchman Charles Planet proudly wearing the Amgen Breakaway from Cancer Most Courageous Rider Jersey, the prize for spending 125 kilometers in the breakaway on the opening stage in Sacramento.

The race switched gears this Monday with the first real test to the general classification contenders in a mountainous Stage 2 that took the peloton from Rancho Cordova at sea level to the Heavenly Mountain Resort at South Lake Tahoe with an accumulated 4419 meters of climbing over six KOMs.

Seven riders, amongst them Luke Rowe (Team INEOS), attacked from the gun and opened a healthy gap on the peloton swiftly. Despite no real threats to the general classification up front the peloton didn’t allow the breakaway’s advantage to go beyond the five minute mark. With 100 kilometers to go the peloton had shaved the gap to less than one and a half minutes.

As the race made its way to Carson Pass – which at 2627m of elevation, was the highest point ever transversed by the Amgen Tour of California in its 14 years history – EF Education First took the reigns at the front of the peloton and led a furious chase.

The last breakaway survivor was reeled in with 75km to go as EF Education First continued to set a lively tempo at the front and soon after Lachlan Morton launched a fierce solo attack.

The gradient and high speed dwindled the front group down to just 15 riders who proceeded to chase down Morton leaving the peloton in arrears.

In the end and elite group of five riders fought for the stage win amongst themselves and it was Kasper Asgreen (Deceunick – Quick Step) who powered across the line first at Heavenly Mountain Resort.

“It was a really tough. I think it was one of the hardest stages I ever did. Today it felt like all we did was climbing today. It was cool to wear this jersey and in the beginning I enjoyed it but later there was a lot of suffering. We went to 2600m, really high altitude. I tried to stay as long as possible in the first group and then in the climb it was a bit much for me. In the end I was really happy with my performance because there weren’t that many guys in the group,” said Planet who crossed the finish line in 47th position, 8:07 minutes after the winner.

The world’s first all-diabetes pro cycling team continues racing at the Amgen Tour of California on Tuesday with the 208km hilly stage 3 from Stockton to Morgan Hill via Mt Hamilton. 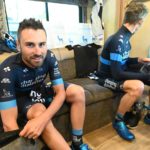 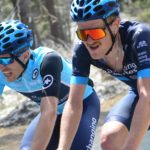