Ventura, California  — Team Novo Nordisk put in a solid team performance on Stage 5 of the Amgen Tour of California on a long and hard day dominated by gale force winds and high speed.

The sun played hide-and-seek this Thursday for the 219.5 km stage from Pismo Beach to Ventura with the peloton experiencing changing conditions all day. After a fast and hectic start with multiple unsuccessful attacks a group of 10 riders, including former world champion Peter Sagan (Bora – hansgrohe) finally broke clear after 60 km of high-speed racing. A chase group of two managed to bridge across soon after and the 12-strong group forged ahead opening a gap of three minutes. The advantage was kept in check by the bunch and by the time the race entered the last 60 km it had shrunk down to one minute and 45 seconds.

Team Novo Nordisk rode offensively but ultimately missed out on the move that eventually succeeded and shifted the focus to riding safely in the bunch, effectively negotiating the 5 KOM’s of the day that translated into over 3000 meters of climbing.

In the end, Tim Declercq (Deceuninck – Quick Step), the last survivor from the breakaway, was caught inside the final 4 km and soon after two riders, Sergio Higuita (EF Education First) and George Bennett (Jumbo – Visma)  made good use of the final kicker to forge ahead. The duo put some decent daylight to the peloton but was eventually brought back before a reduced group decided the stage honors. Ivan Garcia Cortina (Bahrain Merida) proved the strongest in the fierce headwind on the finish straight and scored his first professional win. Charles Planet showed great legs and crossed the finishing line just 24 seconds after the winner taking a solid 28th placing after a long day in the saddle.

This Friday the world’s first all-diabetes team will tackle the Queen Stage of the 2019 edition of the Amgen Tour of California that includes the summit finish on the infamous Mt Baldy a hefty 8.2 km HC climb with 8.4% average gradient.

“It was a crazy stage from the gun. I had incredible legs and I’m very disappointed to have missed out on the breakaway today as I fought a lot to be there. I was in many attacks and spend a lot of energy at the beginning and unfortunately missed the right move.

Afterwards it was all about navigating the strong winds and staying with the high pace until the end. It was a bit hard mentally for me as I used up a lot of energy for nothing but I kept my head up and decided to focus on the final.

My position was not ideal on the bottom of the last climb but I still had good legs and managed to do a strong climb. Unfortunately the crosswinds in the last kilometer split the front group and I couldn’t sprint for a result. I’m very disappointed that I was unable to show my form today in the finish.” 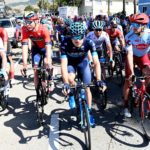