TNN Tests Their Legs on Tour of California Queen Stage

Mount Baldy, California  – Friday’s stage 6 of the 2019 Amgen Tour of California served as the race’s Queen Stage and with Mt. Baldy’s summit finish featuring a 8.2km climb with an average gradient of 8.4%, it lived up to its billing.

The Team Novo Nordisk squad was prepared for a brutal day in the saddle, and rode strongly as a team, matching the pace in the peloton until the penultimate KOM, when the general classification contenders began to play their cards for the stage win. Max Schachmann (Bora-hansgrohe) put in the first big attack with a little over 10km to go, and swiftly bridged across to the last remaining escapees from the day’s breakaway. The German rider opened a gap of 0:45 but was caught by the favorites with just under 3km to go.

Sergio Higuita (EF-Education First) forged ahead splintering the group, and only Tadej Pogačar (UAE-Team Emirates) and George Bennett (Jumbo-Visma) were to able follow the young Colombian. IN the  Pogačar (UAE Team Emirates) edged out Higuita (EF-Education First) in a two-man sprint to the line, taking the stage 6 victory and the yellow jersey from Higuita’s teammate Tejay van Garderen.

All Team Novo Nordisk riders completed the grueling stage with Charles Planet, David Lozano and Peter Kusztor finishing behind the lead group and 10:24 behind the stage winner.

The world’s first all-diabetes team concludes the 2019 edition of the Amgen Tour of California on Saturday with a 141km final stage from Santa Clarita to Pasadena.

“This is a really nice race. I really enjoyed every day and every moment. Today we did a very good job. The team was together and rode strongly. It was a really hard stage with a lot of climbing but we passed this challenge. We still have one more stage to go but I have to thank my colleagues and all the staff. Everyone did an amazing job all week.” 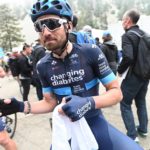 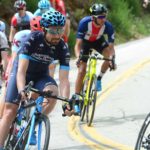