Wujiang, China— Andrea Peron sprinted to 11th place on stage 4 of Tour of Taihu Lake as the for the fourth time in a row the day ended on a bunch sprint.

Team Novo Nordisk once again rode a tactically smart race focusing all the energy on making sure Peron was well sheltered and ready for the predicted final gallop. The pan-flat course in Wujiang made it hard for any riders to break clear of the pack but eventually a group of five opened a gap. Despite going all-out, the breakaway was never allowed more than a minutes’ advantage and were brought back inside de final 10 km.

The fast men in the peloton stepped up for the bunch sprint and in the messy, fast gallop Androni Giocattoli emerged victorious as Matteo Pelucchi took his second win this week ahead of teammate Marco Benfatto. Andrea Peron was in the mix once again and finished in 11th position.

This Monday the world’s first all-diabetes professional cycling team will continue to race in China this Monday on stage 5 of Tour of Taihu Lake, a hillier 127km stage that starts in Jurong Chishanhu Lake and concludes in Jurong Maoshan.

“Today a breakaway of five riders went but we brought them back with 10 km to go. It was flat and not very technical all day so pretty much every sprinter had fresh legs for the final. The team once again did a great job. They protected me all day and set me up for the bunch sprint. I was 11th but naturally I wanted more. It’s been a long season and my form is not 100% but we’ll keep trying. Tomorrow is a harder stage with a few climbs and it will be important for riders fighting for the general classification.” 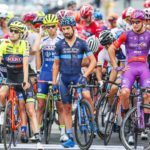 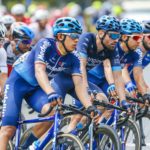