A rider attacked immediately from the start and two riders followed his attack establishing a three-man break. No Team Novo Nordisk rider made the break.

The break was reeled in with less than three km remaining on the day with Sam Bennett (Bora-Hans) taking the win in the bunch sprint. Team Novo Nordisk’s Andrea Peron was the team’s best-placed rider in 20th.

Team Novo Nordisk proudly closed out the only World Tour race in the Middle East with cheers from local families with type 1 diabetes. The riders were greeted by children at the finish line who were inspired to keep chasing their dreams while living with diabetes.

“After seven days with long stages, long transfers and a lot wind and of course racing against the top riders in the world, I would say it was an amazing week and the guys did a great job.

We fought for points, Charles was in the breakaway on many stages and all the guys did a great solid job supporting him throughout the race. We can see the team is stronger and more united than ever before. This race continues to show what is possible with diabetes.” 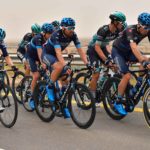 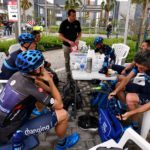