Sappada, Italy — Team Novo Nordisk survived a long and hard day in the saddle in the queen stage of Adriatica Ionica Race with two-times Hungarian national champion Péter Kusztor showing his fighting spirit over 204 kilometers and over 4000 meters of climbing. Mark Padun (Team Bahrain Merida) was the victor on a day of inclement weather.

A three-rider breakaway got the green light from the peloton early on and animated the first half of the stage which started in Palmanova under difficult conditions of humidity and high temperatures.

Several riders struggled in the hot weather, which led several to abandons as the race hit the first of the four climbs of the day. The lead trio had carved a healthy seven minute gap on the bunch but the last escapee was caught in Sella Ciampigotto, the final CAt-1 climb, as the favorites put the hammer down. The high tempo shrunk the peloton to just 20 riders with Péter Kusztor unable to make the cut.

Behind the sudden turn in weather conditions saw the chasing groups get caught in a powerful hailstorm with the temperatures dipping suddenly from over 30 to 10 degrees celsius.

Team Novo Nordisk was hit by misfortune as our Spaniard David Lozano crashed in the final descent and was forced to abandon the race with a little over 30 kilometers remaining. Fortunately the 30-year-old climber escaped with minor injuries and should be fit to return to racing shortly.

Padun proved to be the strongest on the day and took the stage win in a select group sprint and, with it, the leader’s jersey.

Kusztor took no chances in the tricky weather conditions and crossed the finish line in Lago di Misurina in 47th position as our best placed rider.

The world’s first all-diabetes pro cycling team will take on the third stage of Adriatica Ionica race this Saturday, a 204.5 km affair that will start in Padola and conclude in Cormons with a far flatter parcours that should favor a bunch sprint.

“It was a really hard, especially in the start with temperatures over 35 degrees. We tried to go in the breakaway but were unsuccessful so we stayed in the bunch and tried our best to safe the legs for the climbs. The first climb was not exactly easy but the tempo was not so fast so I was able to stay in the first 20 positions but the second climb was already full gas. I tried my best to stay at the front but I dropped. I found a strong group and we pushed all the way to the finish. In the final 30km it was pretty cold and we were hit by a hailstorm and then it rained all the way to the end.” 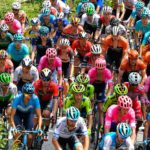 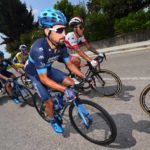