Trieste, Italy — An untimely crash in the final kilometer derailed Team Novo Nordisk’s ambitions for a good result in final stage of Adriatica Ionica Race as our designated sprinter Andrea Peron was unable to contest the final bunch sprint.

Starting in Cormòns the fourth and final stage of the Italian race was short and fast, with the peloton racing eastbound towards the coastal city of Trieste over 103.5 km. With all but one categorized climb on the profile and a flat finishing circuit all eyes were set on the fast men, including our Italian sprinter Andrea Peron, who had earmarked this day to fight for glory.

Matteo Badilatti (Israel Cycling Academy), Winner Anacona (Movistar), Thimo Willems (SportVlaanderen-Baloise) and Joel Nicolau (CajaRural-Seguros RGA) elected to defy the odds and went on the breakaway but were kept on a short leash all day and absorbed on the KOM in Prosecco.

As the race entered Trieste Team Novo Nordisk kept Peron in a good position and as the diminished bunch crossed the finishing line for the first time our 30-year-old Italian was riding strongly and perfectly placed in the first third of the group.

Disaster struck when four riders, including Peron, went down in the penultimate corner, just one kilometre from the finish. Fortunately the indecent bore no grave physical consequences for Peron who finished the stage, albeit with several skin abrasions.

Péter Kusztor, who was to be Peron’s leadout, was our best finisher while Álvaro Hodeg (Deceuninck – Quickstep) proved once again to be the fastest rider in the Adriatica Ionica Race by out-sprinting Edward Theuns (Trek Segafredo) to take his second stage win in this edition of the race. Mark Padun (Bahrain) finished safely in the bunch and won the overall classification.

Despite the setback in the final stage, the world’s first all-diabetes pro cycling team showed their attacking spirit with some great performances during their first participation in Adriatica Ionica Race, namely with two breakaway exploits by Umberto Poli in the first stage which featured over 20km of gravel sections, and Charles Planet who went on the attack two days later showing the #ChangingDiabetes jersey at the front of the race.

“It was a really fast stage. I felt really, really good and when we entered the circuit there weren’t many riders left in the group so it was relatively easy to stay in a good position at the front. Sadly there was some chaos in one corner and I went down with some riders. It was about one kilometer to go so there was nothing I could do. The race was over for me then.” 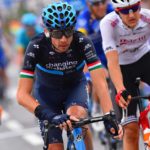