BARDUFOSS AIRPORT, NORWAY – Javier Megias launched first into the breakaway on Friday, leading a fast group of six riders up into the Norwegian seacoast, passing mountain rivers thick with fish in the heart of salmon country at the Arctic Race of Norway.

Megias and his companions began their sunny day in Sjovegan, and quickly moved out to a three-minute advantage over a peloton intent on a group sprint at the finish on a military airstrip further north. Crowds of fans lined the road waving Norwegian flags to greet the riders.

As military aircraft flew above the finish line, and heavy machinery demonstrations wowed the fans, Norway’s own Alexander Kristoff won the final sprint, having passed Megias and his breakaway group with less than 10k to go.

Over the weekend the Arctic Race continues around Tromso, with 65,000 inhabitants Norway’s largest city north of the Arctic Circle. Saturday finishes uphill at a nearby ski mountain, while Sunday’s circuit race through the city promises fireworks and excitement to complete the week.

“Today was a beautiful stage, a lot more sunny than yesterday. I made it in the break, but Charles was trying as well, and we were six altogether and working really good. It’s incredible how much the fans here like cycling, and I can’t believe how beautiful the country is.”

“Javi went first in the breakaway, and took two riders with him. Then a fourth, then two more for six in total. BMC was controlling the break all day, and let them go out about three minutes. At the finish Katusha took over to get the sprint for Kristoff, and for us it was a great success. The weather today was much sunnier than yesterday and the crowds were even more enthusiastic.” 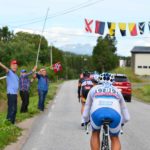 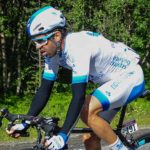