Immediately following the starting gun, Verschoor, along with Kouvenhoeven Sjoerd (Metec KTH), Wietse Bosmans (beoban) and Kukrle Michael (Whirlpool-Author), pulled out in front, and before the first kilometer, the four-man group had formed the day’s breakaway.

The group eventually built a maximum gap of 5:30, and Verschoor was able to win two mountain sprints and one standard sprint, while Lampre – Merida controlled the peloton, looking to protect yellow jersey for race leader Diego Ulissi.

As the race entered nine final circuits, comprised of technical, 9-km laps on challenging pave´, the breakaway remained intact. But a full-gas peloton was determined to reel them in, at times reaching speeds over 65km/hr, and by the fifth lap, the advantage had dwindled to 0:45.

The break was finally caught with two laps to go, and the Team Novo Nordisk squad shifted its focus to putting climbers Javier Megias, David Lozano and Charles Planet into position for the steep finale.

At the final lap, an elite group of just over 20 riders emerged, which included Megias and Lozano. “I was working to put Javi into position on the final sprint, because he’s faster than me,” Lozano said, “But when I saw that he was blocked on the side of the road, I did what I could to get in the best position possible.”

“Our goal was to get in the break and to set up Javier, David and Charles for the finale,” said Team Novo Nordisk SVP of Athletics and GM, Vassili Davidenko said, “so today, we accomplished 99% of our goals” 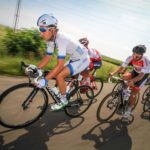 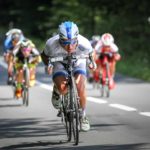