David Lozano: ‘Til Next Time, KOM.

I’d been wearing the King of the Mountains jersey since after stage 1 right through the last stage where I went on the attack to get enough points to win it outright.

The race ended and I stood on the podium, celebrating another jersey win for the team.

Then while we were driving back to the hotel after two hours, we got the official results – I was second. I had the same points as the eventual race winner but because he finished ahead of me on time, he was also awarded the mountains jersey.

We checked the rules and they were right, he was the winner. I couldn’t do anything about it. Well, actually, I can. I will use it as a boost for the next races. We were very close so why not go again and try to make it happen.

It was really good to go on the podium every day in the Tour of Hungary. I saw other riders respecting me a bit more. They’re not just respecting me more, but the whole team had more respect than usual. I think it’s because I was wearing the jersey every day and the performance we had altogether. 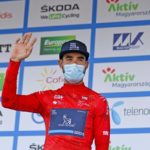 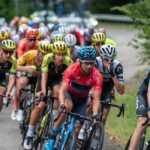 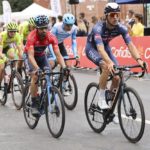 To be in this team is quite special. There are always a lot of people following us, not just for the results but for the inspiration. To show the world that it’s possible to live the life you’ve wanted with diabetes. When you have results like last week or winning in Rwanda and also the way Charles (Planet) has been racing, this gives hope to many families. It’s cool to feel this kind of emotions.

It’s great because it’s actually how my family got inspired. When I was diagnosed, my mom was scared I would be like my father. My father lives with type 1 diabetes and struggled to control it in the early days as he didn’t have the proper education when he was young.

When I was diagnosed, my mother thought I would have the same struggles. I was diagnosed quite late, at age 22. By then, I was already racing professionally on the mountain bike.

My diagnoses made the news because it was a day before the World Cup where I’d be selected with the national team. The news was everywhere. One of the former riders on Team Novo Nordisk, Javier Megias, called me about the team’s mission and told me to not give up.

My mom and I met with [team CEO and Co-Founder] Phil Southerland in Barcelona. I didn’t speak any English. Just some basic words here and there, but I remember I could feel that he really wanted to help and really believed in what he was telling me. That feeling was more than words.

My mom doesn’t speak English and was asking, “What is he saying? Is he saying you are going to have a normal life?”

Phil signed me to the devo team, and three months later, I signed for the pro team.

This has completely changed my family’s life. My father manages his diabetes so much better now and my mom doesn’t worry about him anymore.

He sees what I am doing in the cycling world and it gives him so much motivation. As a team, we are racing in the best competitions in the world, showing we can be in the breakaway at Milan San Remo and many other races, and diabetes doesn’t have to be a restriction to ,life.

To be honest with you, it’s not like I think about being a cyclist with diabetes every day of my life. As an athlete, you always want to perform because you’re working hard, you’re a cyclist first and foremost. When I am training hard, to me I’m just thinking about cycling. But when I’m doing something important like having the mountains jersey at a race or being in a breakaway, at some point you start thinking about the team’s mission and you know you’re doing something important. It’s true. When I am in a breakaway, I literally think about the families we are inspiring around the world. When I’m in a jersey or win a race, I have so many messages from kids, mothers and fathers, and I realize how important it is to be doing what we’re doing.

In life, it always looks bad when a door closes in your face. But sometimes the best things in life can come from it. It’s like someone getting divorced, and then all of a sudden, they meet the girl of their dream. When I got diagnosed, it looked like my world was ending, but I found a team where I could continue my career and empower others.

I believe it’s about your attitude to adversity. If you get diagnosed with diabetes, it’s easy to be depressed and feel like you can’t do anything because people tell you so many negatives and all the things you can’t do. But at the end of the day, it’s in your hands. If you want to do something, you can do it. 100%.

Team Novo Nordisk go into Tour of Hungary on a high