The second and final stage got off to a fast start, with a group of 8 riders pulling away soon after the gun and staying away for the majority of the race’s 185.3 kilometers.

“Today we really wanted to protect David Lozano for the GC,” said Team Novo Nordisk rider Charles Planet, “because it was a really good opportunity for him and for our team. I think we rode well together and took care of each other, especially David.”

The breakaway was finally reeled in with 20km to go, and as the riders began to ascend the race’s final climb, the peloton was fractured, with Lozano and Planet pulling away with a front group of approximately of 60 riders.

“We made it to the first group and we tried our best,” Planet said. “The profile was up and down all day, and it was a very perilous final, with a super steep 1-km climb 5km from the finish.”

“Today was an easier day on paper” said Lozano, “and it all went as we planned! I had the guys with me, just in case a mechanical happen, and on the last climb, 8km before the finish, Charles and I stayed up front.”

Everything was set for the bunch sprint with 3km to go, where Sam Bennett (Bora-Argon) edged out Mark Cavendish (Dimension Data) by a wheel to take the stage win. Lozano and Planet finished 26th and 27th respectively, with Lozano finishing 17th overall, 0:07 behind Daniele Bennati (Italy), who claimed the yellow jersey.

“We both did our best,” Lozano said, “but in the end the sprint was really fast and nervous. Still, finishing inside the top 20 at a race like this is important for the team and myself! I hope this means good days are ahead as we move towards the end of the season!” 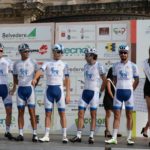