Stephen Clancy, who was making his season debut, did very well to make the early breakaway of nine riders showcasing the Changing Diabetes jersey at the front of the Spanish race. However, after one hour cramps forced our Irish rider to leave the company of his fellow escapees and he was soon after caught by the Movistar led peloton. The world’s first all-diabetes professional cycling team then focused their attention to riding in protection of Spaniard David Lozano, the designated leader, and ensure he had the best chances to fight for a good overall result.

The bunch ensured the breakaway was always kept on a short leash and ultimately brought the escapees back with a little over 60 kilometres to go.

Soon after, in the aftermath of a collective crash, the race was neutralised for almost 10 kilometres due to shortages of ambulances in the convoy. When the race resumed successive attacks made the selection with 20 riders getting a gap. Ultimately, Jonathan Hivert (Direct Energie) launched a decisive attack in the last climb and took the win ahead of Luis Leon Sanchez (Astana) and Sergio Higuita (Fundacion Euskadi). Lozano was the Team Novo Nordisk’s best finisher on the day crossing the line in 36th position, 12 minutes 47 seconds down on the winner.

“It was a really hard race today. Movistar took charge of the race since kilometre four or five. (Carlos) Betancur was particularly strong today. He was pulling really hard all day. Personally I felt really good but I wasn’t in the best position at one point so I dropped a bit. I managed to come back and on the second climb they neutralised the race a bit because there was an issue with the ambulances. Finally 20 riders or so went up the road and unfortunately I didn’t have the legs to follow them.” 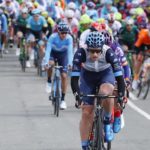 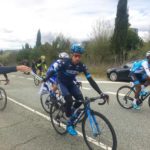