A group of five riders pulled away after the race’s first lap, and seven more riders soon join. Team Novo Nordisk fought inside the main group. “It was a tough stage for everyone,” Team Novo Nordisk Sport Director Pavel Cherkasov said. “Riders started dropping off right from the first lap. We lost Brian Kamstra on the second lap and Nico Lefrançois fell off on the third. Unfortunately both weren’t able to finish. Today felt like a survival stage for our guys.”

Due to the extreme conditions, the organizers made the decision to stop the race one lap early. Canadian Ben Perry (Silber Pro Cycling) took the win, and the Team Novo Nordisksquad finished with the main group, with neo-pro Medhi Benhamouda finishing best for the team at 16th.

“From the start, it was pouring rain rain, icy rain,” said veteran Team Novo Nordisk rider Martijn Verschoor (NED), “and it was very windy. Halfway through the race we lost site of the breakaway and weren’t able to catch them again. My teammates raced very well on this brutal stage, and I’m optimistic for the upcoming days.” 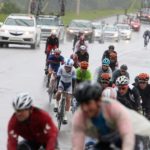