How TNN Pro Cyclists Keep Fit in the Off Season

As a professional cyclist, the off-season is the only period during the year where you can truly switch off, take a vacation, grab time away from the bike and regain some life balance. It also represents a golden opportunity to work on some general fitness and heal both the mind and the body with some cross training.

While many bike riders like to build up their base form in the gym with a structured weightlifting plan, others embrace the idea of acquiring skills in other sports, a strategy that many coaches nowadays encourage as a way to strengthen their bodies, improve their immune function and activate muscles and joints that might have been neglected during the racing season.

From surfing to mountaineering to cross country skiing, the choices of alternative forms of exercise are wide-ranging as pro cyclists look to decompress from the punishing training loads on the bike during the season. Ultimately, the end goal is to provide different stimulus to both the body and soul so they can recharge the batteries for yet another demanding year as a professional cyclist.

Isle of Man’s Sam Brand and Dutchman Brian Kamstra make the most of the winter months by challenging themselves with different sports and training methods while keeping the focus on retaining a good overall fitness. <insert links to riders bio pages>

For Sam Brand, the off-season allows him to indulge in one of his former passions: swimming. The 27-year-old Manx cyclist comes from a triathlon background, but since turning professional with Team Novo Nordisk in 2016, his visits to the pool have been few and far in between. However, during the winter months Brand is often found doing laps in his local pool to build up whole-body fitness. Ironically, swimming was never his strongest suit while competing in triathlon but the benefits of the sport are not lost on Brand:

“I started triathlon seriously in 2011 when I went to university. I wanted to do something that would help with my diabetes management and my dad had raced age group worlds in triathlon, so that was the inspiration behind my decision. In triathlon, I was never a swimmer, I was a runner who could ride a bike so I had a good engine but always had to play catch up on the swim,” said Brand. “Even though swimming wasn’t my strongest suit in triathlon I do miss it. I haven’t really used my arms much for the past three years since I left triathlon so when I go back to the pool it’s quite fatiguing. One way to ease into the training is mixing up the stroke styles so you use different muscles and delay the onset of fatigue.”

With a swimming pool just 100 meters from his home in the Isle of Man, Brand highlights the convenience of having an alternative setting to maintain his fitness in the off-season, boost his endurance base and add a bit of variance to his conventional training regime.

“I enjoy swimming and I think it works for me. I go in the pool and when I come out, I feel refreshed. I do something off the bike and there are a lot of benefits. It’s soothing, almost like a massage because you have the feeling of weightlessness in the pool,” explained Brand. “In this off-season, for around two weeks I probably went every other day. I went in and tried to not have too much of rigidity and take away the fun. I would give myself an hour. I would do 16 lengths, which in total adds up to 400m. I would do freestyle for the first part and then alternate 100m freestyle, 100m breaststroke, 100m backstroke and 100m freestyle again. I would do six or seven of these, which adds up to about 2000 to 3000 meters of swimming.”

While delivering a break from a typical training routine and acting as a low-impact way to maintain fitness, swimming also crucially allows Brand to reset mentally and regain his hunger to ride the bike.

“The more time you spend off the bike, the more you want to get on the bike. You have to make sure that motivation and hunger don’t come all at once. You don’t want to just jump back on the bike and do it all in one day. For me, that switch from the bike to the pool is so important. After a couple of weeks I feel a renewed love for my bike and can’t wait to get back on it,” concluded Brand.

Dutchman Brian Kamstra, a former track athlete and currently in his fourth professional season with Team Novo Nordisk, resorts to ice skating during the off-season to build up his physical endurance and mental stamina. The bitter cold winters in the Netherlands provide the perfect conditions to ice skate outdoors and Kamstra, whose girlfriend is a professional ice-skater, makes the most of the opportunity to put on the blades and test his skills on the ice.

“As soon as the cycling season ends, you can start ice skating. It’s a good stimulus for the muscles. It increases your resistance to fatigue. When you use the proper technique in ice skating you adopt an almost 90-degree angle and to go forward you push sideways,” explained Kamstra. “It’s incredibly hard, especially early in the season but later on, when you do sessions three times a week or so, your body gets used to it. In the beginning, you get a lot of fatigue in your upper legs, which is very good training for cycling as you can increase your lactate tolerance.”

As a sport, ice skating uses many of the same key muscles groups as cycling and depending on the training scheme a cyclist can both work on endurance and sprint power.

“You use the same muscle groups and it’s the same type of conditioning training. It’s identical to cycling, but the movement is slower. I know a lot of track sprinters who do a lot of ice skating, especially Canadians. They do sprints on the ice skating rink where you can improve your endurance and your explosiveness.”

“I sometimes do short intervals, just one or two laps but other times I can do 80 laps. A typical training session for me lasts around one hour, one and a half hours maximum. The closest ring to my home is some 20km away, but I also like to go on the frozen lakes when the weather allows for it,” explained the 25-year-old Dutch cyclist.

Embracing the idea of building skills in other sports might just give a cyclist the extra edge to improve on the bike. Kamstra highlights the attention to detail one has to develop when seeking to enhance his or her ice skating abilities. That razor-sharp focus on technique rather than raw power demands an acute body positioning awareness, core strength engagement, and mental fortitude. Both mental and physical components that allow Kamstra to strengthen his profile as an athlete both on the ice and on the bike.

“Technique is fundamental in ice skating. On the bike you do efforts and you monitor your power and heart rate, but with ice skating, you have to be much more meticulous in your approach. You’re constantly thinking, ’Is my technique proper? Am I skating deep enough? Am I at a 90-degree angle? The turn is coming so which arm goes first? Can I glide a bit farther?’ The focus is much more on technique than times. The better your technique is, the faster you can go. So, sometimes, I’ll use a GoPro camera to monitor my progress and look for ways to improve my technique,”, detailed Kamstra.

The offseason in professional road cycling typically coincides with the winter months in the northern hemisphere. The two/three month period that extends from late October to early January can be challenging for riders with diabetes, the reason being the management of the condition can be more intricate in cold weather conditions versus in the summer.

However, Kamstra says that in his experience there is no easier season and diabetes management can be as easy or as volatile during the summer.

“Some people say that managing diabetes is harder in the summer but I’m skeptical about that reasoning because sometimes I experience the opposite. In the winter it’s cold and you can burn a lot of carbs trying to stay warm. However, when I have a rest day, I need more insulin than in the summer. It’s complex, and depends a great deal on what sort of physical efforts I’m doing. There isn’t a golden rule,” confided Kamstra. “In winter, I try to train as much as possible outdoors and even if it’s snowing, I go out on my mountain bike. I just put less psi in the tires and I go to the forest for up to four hours. It’s actually not too bad since the trees block much of the wind, which makes it warmer. When I have a five-hour session, I’ll do two hours on the mountain bike and three hours on the rollers,”, concluded Kamstra.

Cross training can be a fun and engaging way to reboot the mind and strengthen the body in the offseason. The benefits are multi-layered and can help a pro cyclist regain the focus and rejuvenate the hunger for chasing results on the bike as well as keeping a high-level of overall fitness. The key concept is to shake up the dynamics of the typical training routine by infusing it with diversity and new challenges.

One important aspect is that cyclists keep their choices to low-impact sports which will help minimize potential hazards and avoid injuries that can jeopardize their sporting careers.

As they prepare to start the 2019 season proudly showcasing the Team Novo Nordisk colors in the professional peloton, gliding is the way to go for Sam Brand and Brian Kamstra, be it on the water surface or thin ice. And as they devote themselves to fine-tuning their shape for the ordeals they’ll face on the road, the ultimate goal is, and always will be, to inspire, educate and empower those living with diabetes. 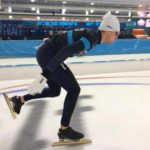 Sam Brand nominated for Isle of Man Sportsman of the Year

Everything Is An Opportunity – Lockdown Diary of a Pro Rider