“I knew the race would come down to the final climb, so I tried to save energy and keep good position throughout the day,” Megias said. “On the final lap, I made the front group of about 20 riders. I was gapped on the final meters of the climb but was able to win the sprint from my group.

The 144.2-km race featured 14 laps around a 10.3-km course that included a 185-meter climb. Initially, four riders escaped with an additional rider bridging up. The five-man break stayed away until the final laps around Utsunomiya Forest Park. Once they were reeled in, an elite front group of approximately two dozen riders emerged featuring Megias. As this group reached the final climb, several riders attacked and managed to earn a small gap before the summit.

Davide Villella (Cannondale-Drapac Pro Cycling Team) extended his gap on the descent and soloed to the win. Sunday’s race served s Megias’ fourth year at the Japan Cup with his previous best result as 15th place in 2015.

In China, another Team Novo Nordisk squad is racing at the nine-day Tour of Hainan. 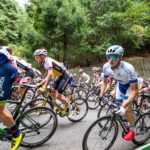 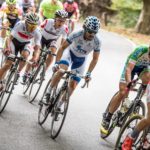