I know this has been a crazy time for the world and although it’s been personally challenging in many ways, I’ve enjoyed being home. I returned home from the UCI Track Cycling World Championships in March, right before COVID-19 hit. My mom moved up to Pennsylvania from Florida last year to be closer together and also help me along this Olympic journey.

I love traveling for competition and enjoy seeing the world, but this is the first time I’ve been home like this in six years. Usually, my season is all year around and as soon as I’m home, I’m thinking about my next trip. It’s been nice to be home with my Fiancé and our 4 fur kids.

The UCI Track Cycling World Cup season started in October 2019, where I was on the road and away from home for six months competing in four World Cups spread out through to January 2020. It was a great season and the highlight was finishing 4th in the Sprint in Belarus and ending up 9th Overall in the UCI World Cup Sprint Standings. When I got back from the World Championships, I had a little bit of time to recover and decompress.

For a couple months, I was training in isolation at home and on the road – this was something new and it meant adjusting and adapting. This time period reminded me a lot of the time I was diagnosed with type 1 diabetes, where I had to adapt and adjust to the new norm. In June 2020, USA Cycling announced the Olympic Long Team, meaning all athletes are one step closer in hopes of being selected for the Final Olympic Team in Spring of 2021.

Not too long ago, we launched my new website and sent out a newsletter to announce the launch, along with my logo that really puts my journey and the connection with the diabetes community in perspective. The blue circle in my logo is the global symbol for diabetes – that we are all connected in a special way and my initials subtly share a story that — we are all greater than our highs and lows.

That day of my launch, someone reached out to say they were currently at the hospital with their four-year old who was getting diagnosed with type 1 while reading about my new launch and my logo. I was overwhelmed with emotion, but smiled and thought, as Phil Southerland would say, “Diabetes only chooses the champions.”

Joining Team Novo Nordisk, meeting Phil Southerland and other riders living and racing with diabetes gave me hope. That is a big reason why I’m so open about my diabetes and I’m definitely not ashamed of it now. I’m owning it and living my dream. I can’t thank the team and Phil enough for giving me this opportunity and believing in me.

That is something I reflected on this year. 2020 has been a year of reflection for many – including me.

At the age of 14, my parents split and since my dad returned to his home country of Germany. We’re very close and he’s always been a big part of my life. We used to go running before I went to school in the mornings and he was always there. When he moved, I felt a part of me was missing. I was a teenager, this was when I was meant to be reckless. I did end up running away for a couple days and realized that only brought my mom more pain. I knew I had to make good decisions because my mom was hurting and my dad was gone. I had no motivation for a while and actually gained 15 pounds. My mom got me back on my feet and encouraged me to rejoin my High School cross country and track and field team.

My first coach, Mike Fraysse has made such a positive impact on my cycling and personal life. He was also a big part of me returning to cycling and competition. His home, located in Glen Spey, NY, known at the time as “Mike Fraysse’s Sports Resort” now “Burn Brae Mansion”, is where I first went when I was 11 years old to train and get ready for my first Junior National Championships. I even did my first triathlon there and went to train there a number of times during my career. Mike literally lives in the middle of nowhere and his house is legit haunted – look up Burn Brae Mansion! All the athletes would get in his van and travel two hours to the Valley Preferred Cycling Center in Trexlertown, Pennsylvania (where I reside now) to race! I was thrilled to visit him and his wife Pat recently. Mike is actually a former USA Cycling president back when it was the United States Cycling Federation and has so much history in cycling. We reminisced a lot about the past and he gifted me an 84’ Olympic blanket with a personal note. 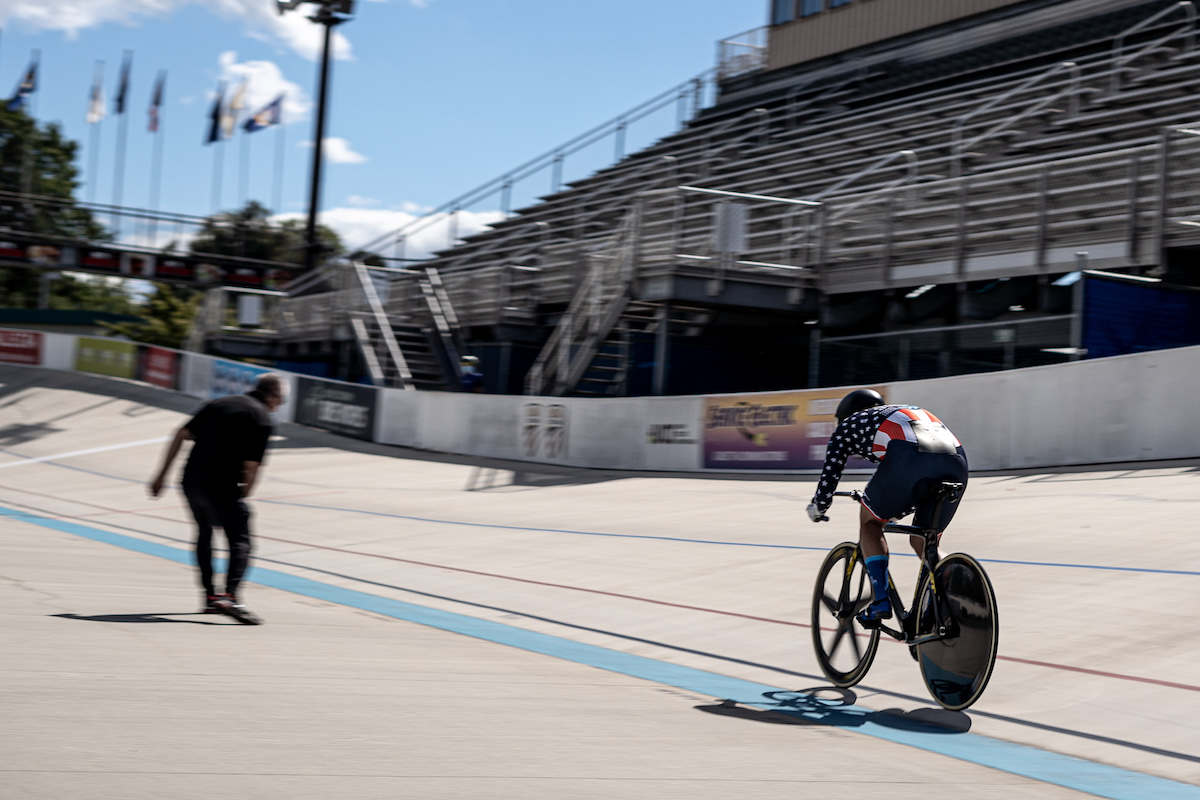 2020 brought me joy in the form of a new US National Track Record in the Women’s 1km Time Trial.

I actually set the record last year but it wasn’t official because I had to be tested by USADA within 24 hours and I wasn’t aware of that.I didn’t know all the protocols needed for the record to be official. I decided next time I’m going to do it, all the checks and balances would be in place.

The kilo is actually a mix of both a sprint and an endurance event. I wasn’t training specifically for it, but I knew I wanted to go for it. I train 25-30hrs a week which includes many double track days and time spent in the gym.

I set the record at the Valley Preferred Cycling Center.. On this track, it meant the kilo would be three laps. The first half lap, it was full out, just go go go. With two to go, I settled into a rhythm and pushed it again coming in with one to go. With one lap to go, it was tunnel vision. I didn’t know if I could hold onto it. It was so windy too. I thought oh no, this is going to be so slow!

So, we’re coming to the end of the year. What’s next? I’m focused on hopefully becoming an Olympian in 2021.

I started competing in the sport of cycling at age 10 and my life has always seemed to take a detour. From my parent’s split, to my diagnosis and my decision to focus purely on track sprint cycling in 2013. I feel that I’m right where I’m supposed to be.

Although, I sometimes feel I may have come up short at times, my consistency in my training and results, as well as giving back in many ways to the sport and diabetes community and most importantly, competing clean through my entire career are values that I stand by.

To compete and represent my country on the world’s biggest stage would truly be an honor. Like many athletes, I’ve sacrificed a lot to be a professional athlete and to be committed to the process. Waking up everyday with a mission and purpose to continue to be my best and acknowledge this opportunity to live my dream is never taken for granted. I thoroughly enjoy that process and the countless hours training with my Coach, Andrew Harris and my Edge Cycling training partners.

The Olympics would not only be the pinnacle of my athletic career, but a life-changing outlet to share my story and reach more people. Keep your fingers crossed for me. 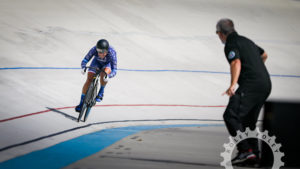 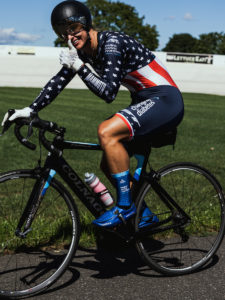