Münster, Germany  –  On Monday, Team Novo Nordisk took on the Germany’s one-day Sparkassen Münsterland Giro. The 208-km race kicked off in Gronau and followed a relatively flat course that was punctuated by seven small climbs before a rainy sprint finish in Münster.

After approximatley 20km of racing, a group of six riders pulled away to form the day’s main breakaway, and the Team Novo Nordisk squad hung together inside the peloton, which was led by Etixx – Quick-Step and Lotto Soudal.

The breakaway was finally reeled in with 25km to go, as the race enter the local circuits, and teams began to set up their sprinters for the finish. Team Novo Nordisk worked for Italian sprinter, Andrea Peron, but the squad was caught behind a crash with only two laps to go.

“The race was decided in the last circuit,” Peron said. “After two laps, we with were about 30 riders in the front, and then I got stuck behind and a crash that split the group. I was able to fight my way back, but with less than 5km to go, I wasn’t able to be a factor in the sprint.” 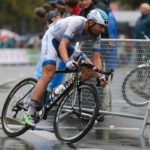