TNN Meets People with Diabetes & Their Families at RideLondon

On the eve of the Prudential RideLondon Surrey Classic, Team Novo Nordisk hosted more than two dozen people affected by diabetes and their extended families at an intimate meet n’greet. The team appreciates everyone who turned out and shared their stories. We are honored to be part of such an incredible community.

“I found out about Team Novo Nordisk when I was looking for people with diabetes who had done Race Across America, because I wanted to know it was possible to do as a type 1 diabetic. And I’ve been following them ever since then.

I’ve read Phil’s book. And just knowing it’s possible to achieve your goals despite the condition you have and whether your pancreas works or it doesn’t has been so important to me.”

“The riders explained to me that the mission of the team is to empower people with diabetes.

Living with diabetes, it often feels like other people are always choosing for me. So to see to that the team stands for chasing your dreams is great. And to see them race at RideLondon will show that people with diabetes are just like anybody else.”

“When I was first diagnosed, I struggled quite a lot to manage my diabetes, and I pretty much got told that I couldn’t do anything. But I when I learned about Team Novo Nordisk I saw that wasn’t true.

My dad was interested in cycling, so I decided to go with him one day and it literally changed my life- it really did. Cycling has helped me to manage my diabetes and I am just so much healthier now.

Seeing Team Novo Nordisk racing in RideLondon will mean everything to me because a lot of people see a stigma around diabetes, they don’t understand it, and I want them to see that people with diabetes can anything they want to do.”

“As a keen cyclist, I came to meet the team and try to get some insight into how the riders manage their diabetes and get a look at the technology they use to compete as a pro cyclist. I also wanted to see what their aims were here at RideLondon and for the future, for their mission of Changing Diabetes, and to see what’s next.

As a rider competing in the RideLondon Sportive, it’s good to know there can be a progression for me to potentially get to the top level. For me, it’s inspiring to know that, in the future, racing in World Tour event is something that I could be doing as well.”

“To be a professional cyclist is an amazing experience, but to be able to meet the people that are the reason you do it is phenomenal.

It was fantastic to meet some of Team Novo Nordisk’s British fans last night. The support we receive throughout Britain is incredible, and to be able to meet and chat some of them yesterday before RideLondon was fantastic.”

“This is my first time racing in the UK, and it was great to see that our message to inspire others affected by diabetes has reached so many people here!”

“I was so impressed with how many people came meet us. It was a huge pleasure to talk to all of them!

The most important reason the team exists is to inspire fans and people with diabetes, so every time they come to support us, I feel like we are really changing diabetes.” 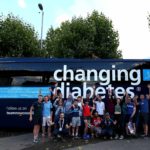