Tours, France — The second French Cup race in three days for Team Novo Nordisk started under sunny skies in the picturesque village of Ste Maure de Touraine among 18 teams all vying for valuable points in the national series, and moved counter-clockwise around the French countryside before two finishing circuits in the city of Tours.

A 7-rider breakaway moved quickly after the start to establish a steady 3-minute advantage, with French team Cofidis Credit Solutions managing the peloton behind in anticipation of a sprint finish. Over 26 hills and light wind the chase moved too slowly at the finish and the breakaway noted a rare success to stay away with just three riders to claim the podium spots.

The lead peloton with Team Novo Nordisk riders Charles Planet and Romain Gioux among the chasers finished 25 seconds back.

“We expected a sprint finish, and the goal for the team today was to stay together and protect Charles and Martijn. The guys today did a good job in the race, and really showed improvement day by day. Now we go to a stage race with some changes in the roster, and we hope to see more progress.”

“Umberto and I tried to get in the breakaway but after about 15km it was 6 or 7 guys who managed to make it stick. After that Cofidis and FDJ held it steady, and we just did all the hills. There was some wind when you went back for bottles that made it harder. At about 25km to go I was in a crash with about 15 guys and that was it for me. Nothing serious, but no possibility to return. I’m getting better after two races and I think I can be a good help for the team next week in Sarthe.” 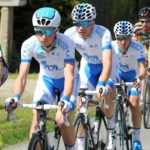 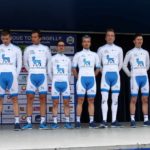 TNN French Riders: What does “inspire, educate & empower” Mean to You?