Verschoor Sprints to Ninth at Tour of Croatia Opener

Koprivnica, Croatia — Team Novo Nordisk’s Martijn Verschoor garnered his best result of the season when he earned a top 10 finish on Stage 1 of the Tour of Croatia.

The peloton began the 227-kilometer stage in cold and wet conditions in Osijek. The rain let up but the day remained cold and grey until the finish. Team Novo Nordisk’s Chris Williams was aggressive from the start and made an early three-man breakaway, but the World Tour teams weren’t willing to let the trio go. Once the day’s main break escaped, they earned nearly 10 minutes before getting caught after the only categorized climb of the stage. In the final 20 kilometers, several riders made late race attacks, but everything came together with Sacha Modolo (UAE Team Emirates) winning the bunch sprint and Verschoor taking ninth.

“Williams punctured after his breakaway came back and missed the one that was successful. After that, all our riders sat in the peloton to eat, drink and conserve energy for the finish. Once the rain stopped, the speed increased, but altogether we were ten minutes behind the slowest schedule today. Martijn and Andrea were both at the front for the sprint, and we had good teamwork to earn that top 10 today. Looking at the rest of the race, all the other stages are shorter, and we will have opportunities for the breakaway and a few more sprint finishes.”

“Position was really important today. I lost a few spots in the final tunnel, and I was behind with 300 meters to go. I was in fourth or fifth position. I needed to go around on the right side, and I made a last-minute mistake. It is my first top 10 of the year, which definitely isn’t bad. It has been a long time since I’ve really been able to sprint, so the form is finally getting there in anticipation of the Tour of California.”

Team Novo Nordisk continues racing at the Tour of Croatia on Wednesday with a 123-kilometer race beginning in Trogir. Stage 2 features one categorized climb and two intermediate sprints before an HC or beyond category summit finish on Sveti Jure, which is the highest peak in Biokovo and the second highest peak in Croatia. 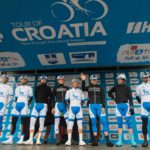