Keszthely, HUNGARY – Charles Planet finished 9th on Wednesday in stage one at the Tour de Hongrie. The French rider finished in the same time as the leaders on a hilly course along the north shore of Hungary’s Lake Balaton, but slipped to third overall as time bonuses gave the stage winner a 10-second advantage in the week-long race.

Planet used his teammates in the first two hours of racing to protect and guide him at the front of the 128-man peloton, with constant jockeying for position in an aggressive group on sometimes narrow roads.

The peloton entered the final 25-km circuit through the tourist town of Keszthely all together, but split up as rival teams sought to break the pack down to just a handful of contenders at the front. Planet made the crucial selection on the steep climb in Rezi, and then played a smart hand to finish well on the technical and cobblestone finish in front of large crowds.

Planet is now third overall, with stage winner Manuel Belletti of Italy jumping to the yellow leader’s jersey with nine seconds over Switzerland’s Patrick Schelling and 10 seconds ahead of Planet.

The 2018 Tour de Hongrie continues on Thursday with another hilly stage near Lake Balaton, but at 190km, figures to be at least one hour longer than Wednesday’s 154km opening road stage.

“We knew the race would break up, and it was important to be at the front every time we did the climb. Thanks to my teammates I had a very good position and a lot of strength left for the finish. In the last kilometers I could follow the sprint teams and I’m happy to keep the high General Classification after a hard stage.”

“This is aggressive and tough racing here, and nobody in the peloton is going to give up their position at the front. Our guys did a good job for Charles and put him; in the right place when it was time to go. We have more stages ahead, and the teamwork is looking strong.” 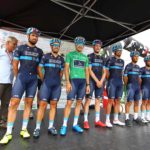 Top 20 for Peron and Team Novo Nordisk in Hungary

Kusztor king of the breakaway on stage two in Hungary