HAJDUSJOBOSZLO, HUNGARY – The longest day of the 2018 Tour de Hongrie was also its hottest, and the flat, straight road from Cegled to the thermal spa resort town of Hajdusjoboszlo put the world’s first all-diabetes professional cycling team to the test.

Charles Planet took a single, vital and valuable bonus second in the opening minutes of the 206km stage, and for his efforts remained third overall in General Classification.

In the rush of action at the end, Ukrainian Andrii Brataschuk squeezed out a victory by just two seconds, leaving his two day-long breakaway companions behind as the race arrived at the finish line. Planet finished five seconds behind the winner.

The resulting gap gave dangerous podium rivals equally vital seconds, and Planet now sits tied with Italian Paolo Toto, who earned two bonus seconds in an intermediate sprint and then finished ahead of the French rider on Friday. Four more riders from other teams are within just three seconds.

The Tour de Hongrie continues on Saturday with a stage from Karcag to Miskolc, and a mostly flat day until the final 35km, with a first category climb that will test the peloton’s tired legs and likely decide the bike race before a fast rush downhill to a flat finish.

“I took the first sprint in front of the bunch after just a few kilometers of racing. Two riders were ahead of us by a couple hundred meters, and I knew I had to go for the time bonus. Thanks to the team today for the effort, we are now at a point in the race where every second counts.”

“The bike race today was all about surviving the 33-degree heat. The breakaway was dangerous when it got out to eight minutes, and the peloton had to ride at 50k per hour for almost an hour to try and catch them. Tomorrow’s stage will be the day when the classification is made, all our efforts are for Charlie.” 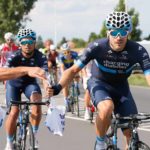 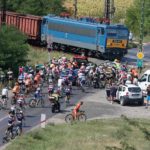