The 146.6-kilometer race began with many attacks and on the first categorized climb, the race splintered into two groups. A flurry of attacks followed and finally four riders escaped. One rider dropped from the break and the remaining three stayed away until the final 20 kilometers when that group fractured. One last rider held on until the final kilometers where the chasing peloton reeled him in.

Heading towards the finish, Sam Brand, Emanuel Mini, and Rik van IJzendoorn put the 21-year-old Poli into strong position for the sprint. He battled for position and continuously worked to close gaps over the final kilometer. In the finish, Raymond Kreder (Team – Ukyo) took the win with Poli finishing in eighth place.

“We had a good team today and a good result. After the start, the team tried to get into the breakaway, but the break wouldn’t go.

On the climb, attacks started and Sam and I finished towards the front at the top. On the descent, there were lots of attacks and counterattacks and eventually four riders got free after 100 kilometers. The peloton was down to about 40 riders and we worked well together to catch the break in the final kilometers. In the final, Ema, Sam and Rik did a very good job helping me and I’m happy with the result.” 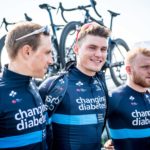 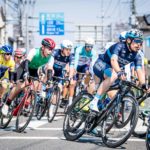