With three category 1 climbs, Wednesday’s 135.8-kilometer stage was another day of climbing. On the descent of the first climb, Timothy Rugg (Team Embrace the World) attacked solo and quickly earned a sizeable gap.

On the third categorized climb, several riders in the top five overall attacked and Lozano grabbed their wheel. The peloton organized and eventually reeled them in.

With 15 km remaining, Lozano attempted a move with another rider to shake up the race before the finish, but again the peloton organized and caught them five kilometers later. The race never pulled back Rugg who held on to solo to the win more than two minutes ahead of the peloton.

The world’s first all-diabetes pro cycling team continues racing at the eight-day Tour du Rwanda on Thursday. Stage 5 is a 95.1-km race that begins in Karongi and finishes in Rubavu. It features three categorized climbs and two intermediate sprints.

“I was surrounded by my teammates throughout the stage and tried to shake up the race a few different times. Overall, I’m happy with my performance today and how things are going here. I will try again tomorrow if the legs let me.” 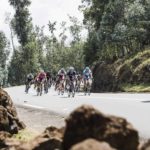