Thursday’s 95.1-kilometer stage began in Karongi and featured two intermediate sprints and three categorized climbs before a downhill finish into Rubavu. On the descent of the first climb, Lozano and three riders attacked. They quickly earned a gap and the pursuit splintered the chasing peloton.

On the second climb, the Mugisha attacked and three other riders including Lozano grabbed his wheel. Two teams worked together on the chase and caught Lozano’s 4-man group with 28 km remaining.

The world’s first all-diabetes pro cycling team continues racing at the eight-day Tour du Rwanda on Friday. Stage 6 is a 108.5-km race that begins in Rubavu and finishes in the volcano park at Kinigi.

“I knew today would be full gas from the start and I was ready to cover any important moves. When the leader and other GC contenders attacked on the second climb, I went with them. We were able to drop Mulu Hailemichael (Ethiopian National Team) who is third overall but then hit a strong headwind.

“I knew I only had one move left in my legs, so I saved it for the finish. I managed to take third, which feels great but I’m already thinking about tomorrow because it is such an important day. My only aim between now and tomorrow is to recover. Today took a crazy amount of effort, and I’m motivated to show up and perform well.” 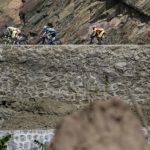