TARTU, ESTONIA — Andrea Peron finished fifth in the opening stage at the Tour of Estonia on Friday, with help from his teammates as strong crosswinds split the peloton in a nervous day of racing.

No real breakaway attempts were strong enough to overcome the ambitions of the rest of the pack in Estonia, and instead of the normal tailwind that Peron and his teammates expected, the constant crosswind repeatedly split the race into smaller groups as teams left behind constantly reorganized to mount the chase.

David Lozano was off the front with around 20 riders after the third hour of racing, and when his group was eventually caught it was Peron who found himself in a late breakaway of around 30 riders.

With less than 20km to go, the peloton regrouped, and Team Novo Nordisk took control of protecting Peron ahead of the big sprint in the university town of Tartu. The Italian rider scored his third top 10 finish of 2018 and his highest placing ever in three appearances at the Tour of Estonia.

On Saturday Team Novo Nordisk will take to the start of the 173km Tartu Grand Prix, a 9.6km loop in Tartu with two big hills that the riders will climb 18 times. 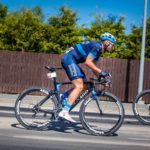 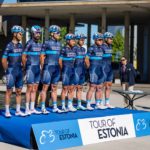 “I really like this race, it’s mostly flat with a lot of difficulties – the main problem is the wind. Every team wanted to be in the breakaway, so it wasn’t until the second half of the race that one big group finally got away. After that group came back I was in the front when another crosswind split the pack. When that came back I still felt good for the sprint, and I am really happy we managed to get fifth today .”