Planet Shines in Late Breakaway at Tour of Slovenia Opener

Celje, Slovenia — Team Novo Nordisk raced aggressively in the opening stage of the 26th edition of the Tour of Slovenia with Frenchman Charles Planet showing the Changing Diabetes jersey at the front of the race in a late breakaway which he instigated after a bold attack.

The 168.5 km stage between Ljubljana and Rogaška Slatina took the riders over a lumpy terrain but no major climbs. Three riders went up the road on the first climb after just 6 km. They carved out a gap of four minutes before the peloton, led by the sprinters teams, took charge and started riding tempo to keep the trio in check. In the second half of the race the breakaway’s advantage started to dip steadily and the last two remaining escapees got swallowed up by the bunch just after the last KOM with 53 km to go. Charles Planet anticipated the moment and launched a fierce attack just after the summit. Our Frenchman, a savvy breakaway aficionado, was later joined by an elite group of 10 other riders who worked well together and opened a gap that topped at one minute and 45 seconds. The second breakaway of the day rode strongly until the last 20 km when some riders started to attack each other which, ultimately, doomed their chances to stay away. Planet fell back into the peloton and the last riders upfront were caught just inside the last 10 km.

The sprinter’s teams went to work at the front and the pace dwindled the main field down significantly. Team Novo Nordisk showed their combative spirit and had David Lozano, Peter Kusztor and Charles Planet still at the fore when the fight for the stage honors was initiated. Pascal Ackermann (Bora–hansgrohe) confirmed his top favourite status and took a convincing win ahead of Giacomo Nizzolo (Team Dimension Data) and Simone Consonni (UAE Team Emirates).

Lozano and Kusztor rounded up the top 25 while Planet, despite the energy spent at the front in the breakaway, still crossed the line in the main bunch.

The world’s first all-diabetes professional cycling team continues to race in Tour of Slovenia this Thursday on the 146.3 km stage 2 that will take the peloton from Maribor to Celje over a more hilly terrain that could see a select group fighting out for the win.

“Today three riders went on the breakaway and in the last KOM of the day I could see it was just only guy left out front. I felt really good, took my chance and attacked. This is how I like cycling. To always be on the attack. Some other riders joined me and we were a really strong breakaway. Unfortunately, in the end, the cooperation was not great. At one point we had one minute and 40 seconds gap and I wish the cooperation would have been better. However, I’m really happy about the move I made and how I raced and will try again in the coming days.” 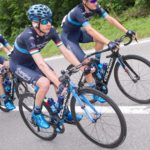 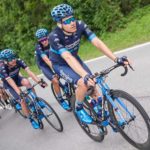