Celje, Slovenia — It was a hard day at the office for Team Novo Nordisk on Stage 2 of Tour of Slovenia. David Lozano was struck by bad luck in the decisive part of the race but did well to finish in the second group alongside his teammate and former two-time Hungarian National champion Peter Kuzstor.

Clear blue skies and blazing sun greeted the peloton at the start in Maribor this Thursday. The shorter stage was deceiving as it had almost 2000 meters of climbing packed into less than 150 km  and big gaps were expected to occur before the finish in Celje. Three riders attacked in the early kilometers and quickly opened daylight to the bunch. Rok Korošec (Slo/Ljubljana Gusto Santic), David Per (Slo, Adria Mobil) and Lorenzo Fortunato (Ita/ Neri Sottoli) stayed away until the base of the last KOM of the day, the Cat-2 Svetina, a 5.4 km climb with an average gradient of 7.7%. This provided the backdrop for the decisive move that opened the way to the stage win. At this point Team Novo Nordisk was represented at the front of the main pack with Peter Kusztor and David Lozano well positioned heading into the climb. However, the latter was hit by misfortune when a crash involving other riders resulted in a broken rear derailleur for our Spanish climber who was then forced to do the ascend with only lower gears.

UAE Team Emirates took the reins and set a demolishing pace at the front of the pack resulting in riders being d drop one by one. Before half the climb was overcome the peloton had dwindled down to 20 or so riders, amongst them Tadej Pogacar and Diego Ulissi (UAE Team Emirates) and Esteban Chaves(Michelton – Scott). With 20 km to go an elite group of six riders remained up front but the the closing circuit in Celje a second chase group that included Mezgec managed to bridge across. In the final sprint the Slovenian fast man opened early and won in front of his home crowd securing the stage win and lead in the overall classification. Lozano and Kusztor rolled across the finishing line three minutes down on the stage winner in 29th and 33rd position, respectively.

The world’s first all-diabetes professional cycling team take on stage 3 of Tour of Slovenia this Friday. Starting in Žalec and covering over 169 km of undulating terrain to Idrij that includes 4 categorized climbs.

“Everyone knew that the last climb would blow the peloton apart and that’s exactly what happened. I had a little bit of bad luck just before the last climb. There was a crash and one rider hit my rear derailleur so I had to do the climb only with lower gears. In the last two kilometers of the climb my legs said enough. I made to the second group and in the end I enjoyed the day.” 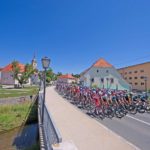 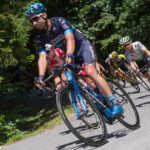