Novo Mesto, Slovenia — Team Novo Nordisk put in a good team effort that resulted in two solid performances by David Lozano and Peter Kusztor who climbed to 25th and 26th in the overall classification, respectively.

With four classified climbs on the menu the fight to be in the initial breakaway was furious with multiple moves being closed down in the first hour. Team NovoNordisk was very active at the front with several riders attempting to break clear, including Frenchman Charles Planet who at one point rode half a minute in front of the peloton with two other escapees but that group was ultimately shut down. In the end, Marco Maronese (Bardiani–CSF), Lorenzo Fortunato (NeriSottoli – Selle Italia – KTM), David Per (Adria Mobil) and Benjamin Hill (Ljubljana Gusto Santic) got the all clear and forged ahead opening a gap that steadily increased up to a whopping seven minutes. However, in the last third of the race, the escapees’ advantage declined rapidly. On the penultimate climb, a few riders attempted to bridge across to the leaders but the UAE Team Emirates led peloton reeled them back in. The escapees were eventually caught with 25 km remaining on the Cat- 2 Dole climb by an elite group consisting of Esteban Chaves (Michelton-Scott), Diego Ulissi and Tadej Pogačar (UAE Team Emirates) and Aleksandr Vlasov (Gazprom–Rusvelo) which had a small lead on the rest of the main field.

Ulissi proved the strongest and after dropping Vlasov in the final kilometres the Italian crossed the finishing line solo taking the stage win in Idrija and climbing to the top of the overall classification.

Team Novo Nordisk rode strongly in support of our two best climbers in the race and both Lozano and Kusztor rose to the challenge and concluded the stage in a select chase group in 25th and 28th positions, respectively. Results that enabled them to take a handful of positions in the overall standings. Lozano now stands in 25th on the GC immediately followed by teammate and two-times Hungarian champion Peter Kusztor who sits in 26th place.

This Saturday, Team Novo Nordisk will tackle an even harder stage with four KOM’s, including the 1st category Predmeja climb, over 153.9 km linking Nova Gorica and Ajdovščina.

“Today we had four climbs on the menu. It was up and down all day in really beautiful small roads. All the landscape was really green with a lot of mountains. The raced had a really fast start. The first 100 km we had attacks everywhere. I was in a lot of moves and I think I paid for it a little bit at the end but I was pretty happy with my performance. I was with the front group for a long time but in the end I missed some power. I’m looking forward to tomorrow!” 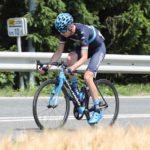 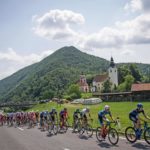