Ajdovščina, Slovenia — Team Novo Nordisk’s David Lozano put up a strong performance on the Queen Stage of Tour of Slovenia and climbed to 18th in the overall classification.

The 154 km-long queen stage between Nova Gorica and Ajdovščina started under challenging weather conditions with heavy rain coming down during the first to hours of racing. Five riders braved the elements and made the breakaway but were always kept on a short leash by the peloton.

With 70 km remaining only two escapees remained up front with the peloton riding five minutes in arrears with all our Team Novo Nordisk riders. The main goal was to keep our to leaders, David Lozano and Peter Kusztor, in a good position to tackle the last climb of the day and the most gruelling of this edition of Tour of Slovenia: the 9km-long Predmeja climb with its average gradient of eight per cent.

The remains of the breakaway were reeled in with 37 km to go and soon after the battle for the overall classification started with Aleksandr Vlasov (Gazprom-Rusvelo) putting in a strong attack that exploded the field. GC leader Diego Ulissi (UAE Team Emirates) and his teammate and local talent Tadej Pogačarresponded as well as Giovanni Visconti (Neri Sottoli–Selle Italia–KTM).

Ultimately the day’s victor was decided amongst this elite group with Visconti out-sprinting Ulissi and Pogačar and taking the stage win. Ulissi was second and keeps the green jersey with one stage remaining. Three minutes after, our Spaniard David Lozano crossed the finishing line in 20th position, a result that enabled him to climb seven spots in the overall standings to sit now in 18th place.

Tour of Slovenia concludes this Sunday with a 167.5 km stage starting in Trebnje and finishing in  Novo Mesto, the unofficial cycling capital in Slovenia.

“We started with an opposite weather to the previous days. We had rain and wind which are not the perfect conditions for me but I managed to save the first part of the stage and stay in the game. I found my legs when the sun came out. I’m happy to have these feeling but also a bit sad that I didn’t start the last climb with the best guys because I think I would have managed to stay with them. Tomorrow we have another chance. Perhaps for Andrea (Peron) because it’s suppose to be a bunch sprint, so we’ll try to finish on a high note.” 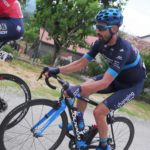 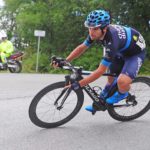